Swansea has been synonymous with the poet Dylan Thomas ever since he famously branded the place of his birth an “ugly, lovely town”. The firebrand writer of Under Milk Wood had a love-hate relationship with Wales’ second city and its residents a love-hate relationship with their most famous son. Yet the story of the two protagonists mirrors each other perfectly: halcyon days followed by a fall from grace, and years in the wilderness before finding a new credibility. With Swansea enjoying a renaissance and Thomas’ work now included on the national curriculum in Wales, Dylan has finally come home to Swansea. 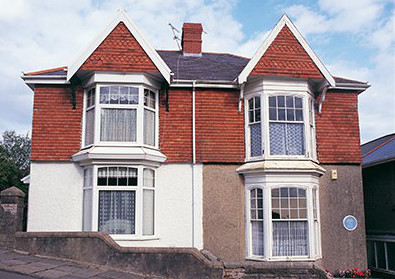 Swansea’s new Maritime Quarter, the regenerated district fringing the five-mile natural sweep of Swansea Bay, is the place to start exploring. The area is home to the Dylan Thomas Centre, where the annual Dylan Thomas Fringe Festival runs from October 27 to November 9, his birthday and the day he died respectively, It celebrates the gritty, wild-boy poetry of Wales’ most famous errant genius with readings, plays and discussions. The event attracts around 4,000 people each year. 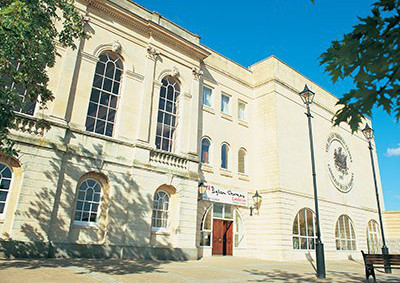 The Centre hosts the permanent Man and Myth exhibition, which traces the story of the poet’s life from a Swansea terrace house to his final days in New York. Aside from the collection of memorabilia, what really brings his work to life is a series of readings on CD, including the booming baritone of Richard Burton reading Under Milk Wood and Thomas himself reading Do Not Go Gentle Into That Good Night, the celebrated paean to his dying father. 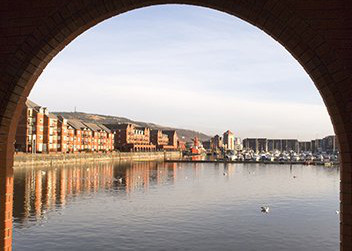 “Thomas was a provincial bohemian and that contradiction defined him,” says Festival Organiser, David Woolley. “He loved the bohemian life in London but longed for the warmth of his home in Wales. 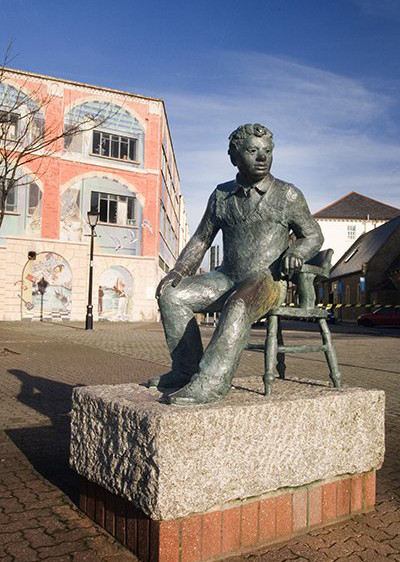 “He never lost his affection for Swansea,” he adds. “In one of his letters to friend Daniel Jones he talks of coming back to Swansea, dreaming of making a bohemian community.” But Swansea was no Covent Garden – especially when Thomas was a boy.

The local economy was built on fishing, farming and, more latterly, copper.

The ruins of the Norman Castle, today hemmed in by modern shopping centres in Castle Square, hints at Swansea’s past as a strategic stronghold at the mouth of the River Tawe. An ally of Henry I established the castle as the seat of the marcher lordship of Gower, but it was raided by the Welsh regularly over the centuries with the first recorded attack in 1116. Its military importance was already weakened by the 13th century.

The Industrial Revolution, however, brought a new sense of urgency to Swansea with the small tidal harbour expanding rapidly from 1830 to become the sixth largest commercial port in Britain by 1893. Copper ore, imported from Cornwall and then Chile, and traded for supplies of Welsh coal, made Swansea the centre of the world copper-smelting trade, earning it the charming sobriquet ‘Copperopolis’. For a tantalisingly brief period in its history, Swansea felt like a place of industry and prosperity.

However, by the time Thomas was born in 1914, Swansea’s industrial heyday was already on the wane. The Luftwaffe, who all but raised the city centre to the ground in 1941, heavily targeted the oil refineries and factories. The industrial decline only intensified during the post-war years, a process intensified by an ill-thought-out rebuilding programme in the Seventies.

The turning point for Swansea came in 2005 with the opening of the landmark National Waterfront Museum. Its compelling, hands-on galleries explore Wales’ industrial history and the impact of industrialisation on its people, from 1750 to the present day. Adapted from a Grade II-listed former dockside warehouse, dating from 1902, the striking new glass and slate extension, designed by Stirling Prize-winning architects Wilkinson Eyre, has become a symbol of Swansea’s rebirth. It takes around half a day to explore all 15 galleries, but particularly worthwhile are the Landscape section on the first floor, which traces the development of Swansea as a community, and Transformation section on the ground floor, where we learn how Welsh enterprise developed the metalworking industry that made industrial Britain a world leader. Better still, admission is free.

The city’s latest project to be unveiled dovetails conveniently with resurgence of interest in Thomas and his work. Number 5 Cwmdonkin Drive is Thomas’ childhood home. His parents moved to Swansea’s Uplands while his mother was heavily pregnant and Thomas was born soon after in the front bedroom. The house and the memories of childhood innocence inspired Thomas to pen one of his best-loved works, A Child’s Christmas in Wales.

The house was used as private student accommodation until local entrepreneurs Geoff and Anne Haden, who now own a 15-year leasehold on the house, acquired the property in 2005, opening it to the public in October 2008. They have invested what they will only describe as “a sizeable sum” to restore the property to its 1914 finery, fitting it out as a living-museum guesthouse with furnishings collected from antique shops, car boot sales and donations. These include a grandfather clock, made around 1840 by a local Swansea firm, a green-velour games table for playing cards and an original phonogram with 78s, including a copy of the Welsh classic, Myfanwy.

House guests are encouraged to poke around the cupboards, use the chinaware and soak up the atmosphere of 1914, with no fridge, no radio and no washing machine, although central heating replaces coal fires and electricity replaces gas lamps as a concession to home comforts.

“The house was an anchor in his life. It kept him safe and grounded but, like any young man, he also reacted against it,” explains Anne Haden, as we take tea in the parlour, Anne straining the loose-leaf brew through a silver strainer and poring the milk into dainty Victorian teacups.

“Thomas was a highly emotionally charged man, brought up by a nurturing mother and an aloof, academic father. He drew on his feelings from childhood in this house throughout his life and work,” she adds. Swansea certainly features heavily in Thomas’ early work, fuelling the early prose and radio plays more than the latter-day poetry for which he is perhaps better known. Portrait of the Artist as a Young Dog, Thomas’ 1940 collection of short stories, is my guide as I explore that evening, retracing Thomas’ footsteps from the Uplands district, past the offices of the then South Wales Daily Post (now Evening Post), where he started work as a junior reporter in 1931, and skirting the front of the tiny, waterfront theatre, where he trod the boards during the early 1930s.

The city’s few remaining Victorian and Georgian properties line Wind Street, now the main artery for bawdy nightlife, as far as Somerset Place, the gateway to the new Maritime Quarter. But one old favourite remains: the No Sign Bar. This traditional, wood-paneled pub, a favourite drinking haunt of Thomas, is ideal for a lazy pint of real ale and a spot of people watching. It also provides the setting for the story Old Garbo, taken from Portrait of the Artists as a Young Dog.

Thomas left Swansea to flex his artistic muscles, living an itinerant life for years between London and Wales. But he eventually found a sense of home, making a prodigal return to Wales and finally settling in Laugharne, Carmarthenshire. He made his home in a creeky old boathouse and spent the final and most productive years of his life here, living with his wife Caitlin Macnamara and their three children from 1949 to 1953. Today the boathouse is museum celebrating Thomas’ life and sometimes hosts readings on the bracing sun terrace with stunning views across the Taf Estuary. The writing shed, where he penned some of his best-loved work, is just a short stroll along the mossy, flower-strewn country lane.

Dylan Thomas collapsed and died in New York in November 1953. He was aged 39. He was on a lecture tour of America, had been mixing with the Beat poets, and Under Milk Wood had been performed for the first time earlier that year to huge critical acclaim. While many suggest that the drink finally killed him, friends of Thomas believe his premature demise was due to his undiagnosed diabetes rather than rampant alcoholism.

Back at Number 5 Cwmdonkin Drive that night, I make my bed in his childhood quarters, a square-box room with a small fireplace, a single bed and a low writing desk.

I turn out the lights, just as Thomas would have extinguished the gas, and lay there in the Bible-black darkness, listening to the grumbling of the pipes and the groaning of the walls alive with memories. Above my head a small scroll with a fragment of Dylan’s words sums up the mercurial relationship between Thomas and his birthplace. Taken from Reminiscences of Childhood, it reads: “This sea-town was my world.”