As the first saints’ day on the calendar, along with delightful displays of Wales’s symbolic daffodil, St David’s Day heralds spring. But how much do you know about the real St David, the 6th century bishop who gives Wales’s national day its name?

1. The nickname ‘Taffy’ for a Welshman links back to St David as the original and ultimate Welshman – the term dates back to the 17th century and derives from ‘Dafydd’, the Welsh for David.

2. The shrine of St David at his cathedral – located in Britain’s smallest city, St Davids in Pembrokeshire – was thought of so highly by Pope Callistus II that he states that two pilgrimages to the shrine was worth one to the Vatican in Rome.

3. King Edward I took the head and the arm of St David from the cathedral after his 1284 conquest in Wales. He displayed the remains along with a number of other holy relics in London. 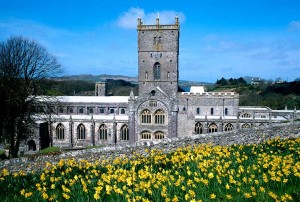 4. David was the only Welsh saint to be canonised by the Western Catholic Church.

5. Yet the abbey at Glastonbury claims St David as its patron.

6. St David’s Day was raised to principal feast status in the church calendar after Henry V’s success at the Battle of Agincourt in 1415, reportedly in thanks to the Welsh saint for intervening on his behalf against the French.

7. In Shakespeare’s Henry V, Fluellen’s English colleague, Pistol, dares to insult the humble leek on St David’s Day, Fluellen insists he eat the national emblem as punishment: “If you can mock a leek, you can eat a leek.” (Act V, Scene I)