Travelling between London and Edinburgh to attend the Edinburgh Tattoo, Anthony Lambert enjoys an indulgent journey on board the Northern Belle, where opulent surroundings, fine dining and some of Britain’s best rail-side views are all part of the service. Step on board the Northern Belle

It’s hard to imagine a more civilised way to travel between London and Edinburgh than onboard the Northern Belle, ensconced in a plush armchair and surrounded by gleaming brass and marquetry panelling as attentive waiters and waitresses deliver delectable food and wines to your table. My wife and I joined the train at London’s King’s Cross station – once a down-at-heel hub that travellers couldn’t wait to leave, but since smartly renovated to take its rightful place as an imposing gateway to England’s east coast and the Scottish capital. Among the nice flourishes by the station’s designers is a sculpture of a luggage cart disappearing into a wall beside a sign for Platform 9 ¾, just as it was described in the Harry Potter books, providing the perfect photo opportunity for fans of J K Rowling’s novels. 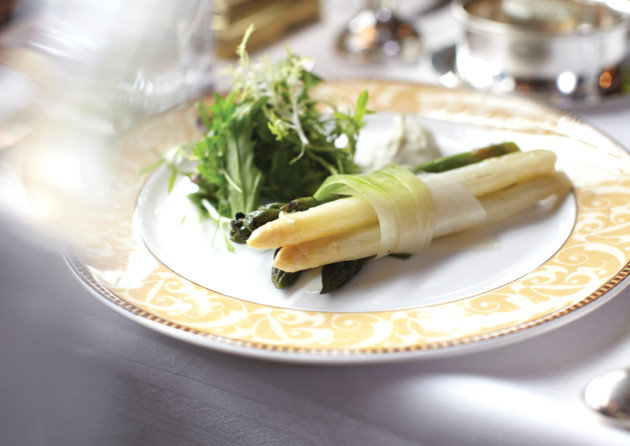 Enjoy fine food on board the Northern Belle

The Northern Belle is the Orient Express’s train for the northern half of Britain, but it makes occasional forays into the territory of its sister train, the southern British Pullman. One of these is timed to coincide with the Edinburgh Tattoo, and we had chosen to time our journey to ‘Auld Reekie’ to see this famous military spectacle. The train is made up of seven dining-cars, two kitchen cars and a service car. They may not have the historical pedigree of the continental Orient-Express or the British Pullman train, but you could never tell that from the décor. Each carriage has been completely rebuilt by British craftsmen to create an atmosphere of tasteful 1930s-style elegance and fine workmanship, with marquetry pictures appropriate to the carriage names, such as Warwick, Belvoir and Alnwick. The Essex-based company that made the marquetry panels was founded in 1895 and supplied commissions for the Titanic, Lusitania and Queen Mary.

The Emirates stadium, home of Arsenal football club, flashed past, before the heights of Muswell Hill and Alexandra Palace swung into view to the west; first built in 1873 Alexandra Palace was the location of the televison station that transmitted the world’s first high-definition television broadcasts in 1936.

Brunch was served after we stopped to collect more passengers at Peterborough, with a fine view of Britain’s only cathedral to have a painted wooden ceiling, dating from 1230–50. After tucking into a Bellini, fresh fruit cocktail and scrambled eggs wrapped in smoked salmon, the conversation with our travelling companions flowed agreeably as we ambled past the site of Mallard’s epic 1938 run to create the world record for steam traction, clocking in at 126mph.

A stop at the Lincolnshire town of Grantham alerted us to the magnificent spire of St Wulfram’s, rising 272 feet above the birthplace of Britain’s first and only female prime minister.

Brief pauses in the magnificent curved train sheds in York and Newcastle – masterpieces of Victorian ironwork – were quickly followed by a lunch of Cock-a-Leekie soup, loin of Aberdeen Angus and British cheeses. Dessert (rhubarb crème brûlée) coincided with perhaps the best view of a cathedral from the railway – the great Norman edifice and adjacent castle at Durham, which was the seat of the Bishops of Durham from 1072 until 1836, when it became part of the university, followed by the delightful stretches along the cliffs of Northumberland.

The tightly packed houses of the planned medieval settlement at Alnmouth, nestling beneath a wooded hill, form one of the most picturesque coastal settlements in the North East. The train affords only a distant glimpse of Holy Island and the castle Lutyens adapted for the editor of Country Life as a weekend retreat. Today, both Lindisfarne Castle and the tiny garden developed by Gertrude Jekyll are looked after by the National Trust.

Scotland is heralded by the Royal Border Bridge, the final link in the railway to be completed and opened by Queen Victoria in August 1850, and the border is crossed three miles north of Berwick-upon-Tweed. The unmistakeable outline of the former volcano of Arthur’s Seat gives notice of the approach to Waverley station, deep in the trench beneath the castle and the Old Town.

From the station, coaches whisked us to our hotels; after our rail journey it was appropriate that we should stay at the Caledonian Hotel, built by the railway company of the same name and opened in 1903. It stands at the west end of Princess Street with views over the castle and gardens beneath the great plug of volcanic rock which gives the castle such an impregnable appearance.

The Tattoo coincides with the Fringe Festival, so the cobbled streets of Edinburgh’s old town teemed with people, packing the bars, cafés and restaurants and creating the cosmopolitan atmosphere that international festivals engender. This was emphasised by the commentator of the Tattoo asking for different nationalities to make their presence known; dozens of countries around the world were represented by clustered cheers around the U-shaped stands that overlook the Castle esplanade.

It is a dramatic setting, helped by the brilliant lighting effects throughout the evening, so it’s better to choose the later performance that starts when the sky is dark. Nothing was built on the esplanade – a rare piece of level ground on the hill – to retain an open field of fire in front of the castle, later becoming a parade ground. The outer gateway that forms the immediate backdrop to the Tattoo is a purely decorative structure of 1888, its gateway flanked by statues of national heroes Robert the Bruce and William Wallace.

The Tattoo is all about colour, music and precision of movement in both marching and dance.The first of the evening’s 12 pipe bands filled the night air with sounds that have stirred men for centuries, but you don’t have to love the pipes or martial music to find the spectacle and massed pipes and drums a spine-tingling experience.

The Tattoo drew to close with the lone, floodlit piper standing high on the castle walls sending out the haunting, lump-in-the-throat lament, Crags of Tumbledown. Fireworks coloured the darkness as the audience joined hands to sing Auld Land Syne.

Taking a steam train around Kent is a real treat