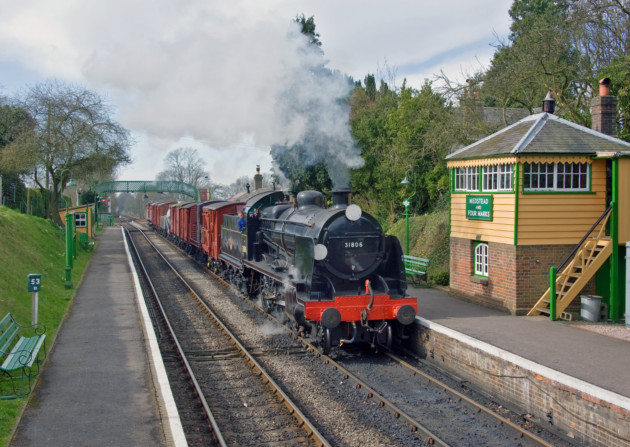 It’s the perfect way to unwind and experience the nostalgic sights, sounds and smells of steam travel from a bygone age.

The Watercress Line is a living history attraction, running lovingly restored steam trains and heritage diesels throughout the year. Fares give you all day unlimited travel, enabling you to enjoy this sedate pace of life exploring each of the four period stations and the nearby towns all on one ticket.

You can join the line at New Alresford, famous for its clear chalk streams and watercress farms, located just 7 miles from the ancient city of Winchester. Opened in 1865, the railway was well known for its early role in transporting this locally grown crop to the markets in London and beyond; from which it takes its name today. Alresford has a charming Georgian town centre with independent shops, a picturesque river walk with medieval Fulling Mill, and National Trust property Hinton Ampner is just a couple of miles away. Grab a bite to eat in the West Country Buffet on the platform, or a take-away cream tea for onboard the train.

At Ropley station you can enjoy a stroll on the elevated picnic area, from where you can cross the famous King’s Cross footbridge to the Loco Yard. Here you can get up close to the locomotives and see preservation in action from the viewing galleries in the impressive engineering sheds.

At the peaceful country station of Medstead and Four Marks, the highest station in Southern England, you can relax and watch the world go by. The steep gradient of the line to this station means the railway needs a fleet of large, powerful steam locomotives capable of hauling heavy trains ‘over the Alps’; a spectacular sight and sound at any time of year!

You can also join the line at the bustling market town of Alton, just 20 miles from Guildford. Here the station is shared with the mainline, with direct trains to and from London Waterloo taking just over one hour. This bustling market town has a delightful mix of historic buildings and modern shops, with its own Curtis Museum and Allen Gallery and links to Jane Austen’s House in nearby Chawton.

The Watercress Line is a living history attraction, saved after closure in the 1970’s and now run by a dedicated team of over 450 volunteers and a core paid staff, whose objective is to preserve part of the country’s railway heritage for generations to come. It is a not-for-profit organisation, with all profit generated from your visit re-invested in the railway.

Special events throughout the year include a Day Out With Thomas, War on the Line, Peppa Pig, Wallace and Gromit, Wizard Weekend, Santa Specials and Christmas Leave, along with spectacular Steam Galas and much, much more!

For opening times and more information clickety click to www.watercressline.co.uk

Taking a steam train around Kent is a real treat