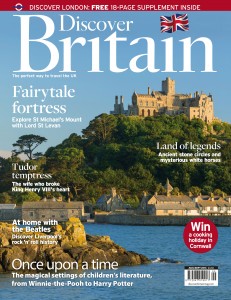 From the giant Cormoran who is said to have lived on St Michael’s Mount, where his heart still nestles among the cobblestones, to the mythical liver birds of Liverpool, the August/September issue of Discover Britain explores a few of the magical legends and stories that abound in the UK…

Never letting the truth get in the way of a good yarn, an abundance of tales – from dancing giants to Merlin’s magic – have sprung up to explain the enigmatic origins of Stonehenge in Wiltshire, a county rich in mysteries and magic, while Cornwall, in the southernmost reaches of Britain and enveloped by the Celtic Sea, is another region that celebrates the legends of King Arthur. Look out for your chance to win a three-day trip to this spectacular county.

Remembering some of our best loved children’s authors who have made their own rich contribution to the UK’s well of stories, we also go on the trail of some of Britain’s favourite characters – Alice in Wonderland, Harry Potter and Winnie-the-Pooh among them. As you might expect, they have associations with some of the most magical locations across the UK, from the Lake District to the Scottish Highlands.

We also explore the astonishingly picturesque Black and White Village Trail in north Herefordshire; the rich history of the islands of the Thames; the Fan Museum in Greenwich, which celebrates its 25th anniversary this year; the secrets of London’s historic villages; and we meet daredevil Chelsea Pensioner Charmaine Coleman.

And, in our exploration of Britain’s enchanting landscapes and legends, it is worth repeating the words of the late, great Roald Dahl, whose 100th anniversary we celebrate throughout the UK this autumn: “The greatest secrets are always hidden in the most unlikely places. Those who don’t believe in magic will never find it.”