Dartmoor National Park is a beautifully bleak landscape of gnarled slopes, peat bogs, cotton grass and sedges. We seek out the best spots to discover the beauty and grandeur of the moor

The top of Bellever Tor is perhaps the best place to get to grips with Dartmoor. In the centre of the national park, its summit offers an uninterrupted panorama at more than 1,400ft. “Bellever has burial mounds, sheep pounds, Bronze Age settlements, 20th-century forestry – features that really reflect the nature of the park, and how its landscape has changed over 5,000 years,” says Steve Scoffin of the Dartmoor National Park Authority (DNPA).

Dartmoor was designated a national park in 1951. Comprising 953 sq km of south Devon upland, it’s the largest area of exposed granite in England, a beautifully bleak landscape of gnarled slopes, peat bogs, cotton grass and sedges. Once largely tree-cloaked, now only around 10 per cent is wooded, and farming is limited to a few hardy sheep and ponies grazing the open moor. 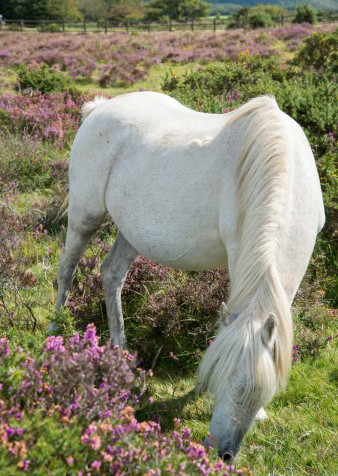 The creation of Dartmoor’s distinctive geology began 280 million years ago, when magma pushed up into the sedimentary strata, cooled and then formed granite laced with minerals such as copper, lead and tin. Over time, erosion has exposed this harder rock, leaving a profusion of hills capped by granite outcrops. Around 170 of these ‘tors’ pimple the moor. Some are big – High Willhays (621m) is the tallest. Others have been weathered into interesting shapes – for instance, Hound Tor resembles a pack of demonic dogs. Many are swirled by myth and legend – the devil and King Arthur allegedly held a hurling match between Hel Tor and Blackingstone Rock (which Arthur won). And some have achieved iconic status – 457m Haytor is the park’s most recognisable landmark.

However, while tors characterise Dartmoor, they are not its only story. Humans have roamed the moor for more than 10,000 years, and many of the structures built by Dartmoor’s early residents – made from resilient granite, and left largely undisturbed due to an absence of intensive farming – have survived, providing a physical record of life from prehistoric times to the present day. Neolithic burial tombs, Bronze Age settlements, medieval farmhouses, ruined tin mines and granite crosses commemorating 20th-century soldiers could all be seen on a single stroll.

Despite thousands of years of human habitation, Dartmoor remains largely untamed. Most of its towns and villages lurk on the fringes, and few roads cross the wildest areas. However, eastern Dartmoor is a little less forbidding. Here, there are bucolic patches around the lush Dart Valley; Dartmeet is the tourist centre, and the place for a cream tea at Badger’s Holt. 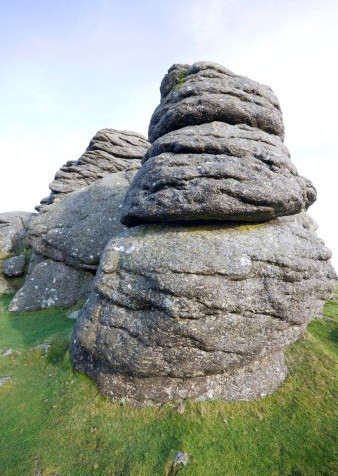 Haytor – one of the most visited wonders of the moor. Getty Images/iStockphoto

The east is also home to a scatter of scenic settlements, where granite cottages snuggle into the hills’ folds: Buckland, Lustleigh, tiny Ponsworthy. Most heralded is Widecombe – home to a disproportionately grand church (the ‘Cathedral of the Moor’) and an annual fair, held in September, to which Uncle Tom Cobley was travelling in the Devon folk song. A walk along the ridge to the east, from Pil Tor to Honeybag Tor, provides fine village views.

A few miles north of Widecombe lies Grimspound, the moor’s most complete prehistoric settlement, comprising 24 circular huts within a stone enclosure. Its remote location is responsible for its preservation, although according to DNPA’s Mike Nendick, “the Victorians did a lot of ‘restoration’ here, so the layout might not be strictly accurate.”

Ashburton and Chagford, two of Dartmoor’s four stannary towns, lie in the east too. Designated in the 14th century, these stannary hubs are where tin would be brought for assessment and sale. Tin mining was so important that the industry had its own laws; if a miner was found to have adulterated tin, his punishment was to be force-fed a spoonful of molten metal. Today the towns are more genteel; Chagford in particular is a comely clutch of thatched cottages, quaint shops and a haunted 13th-century inn.

The Hound of the Baskervilles

Many men have been moved by Dartmoor’s south – a mix of desolate bog, unpopulated upland and spectacular scenery. “The swamp beneath Fox Tor, long rich in stories of swallowing its victims, was inspiration for the Grimpen Mire in the Hound of the Baskervilles,” explains Dave Openshaw, owner of Princetown’s Fox Tor Café. “The Royal Duchy Hotel [now the High Moorland Visitor Centre] is where Conan Doyle stayed while researching.” Before it was a hotel, the Royal Duchy housed officers stationed at Dartmoor Prison. Originally built in 1806, the prison remains a gloomy presence in Princetown; today an on-site museum provides insight into this notorious working gaol – once described as ‘Halfway to Hell’.

More recently, the area captured the imagination of Steven Spielberg: “There’s no other place like it in the world,” the director commented while filming his 2012 movie War Horse in the park. Mike Nendick helped Spielberg’s crew scout locations. “We were sworn to secrecy!” he recalls. “They settled on the Gutter Tor area, which is a fantastic spot, with lofty tors and wide unspoilt moorland.” There’s certainly something cinematic about the landscape, especially the interplay of Leather Tor, Sheepstor and Sharpitor looming over Burrator Reservoir. Horse riding, cycling, walking, camping, wildlife spotting… Dartmoor has much to offer those who love the outdoors. Getty Images/iStockphoto

Today visitors can follow the 7km ‘Exploring War Horse Country’ walk around Gutter, which showcases all Dartmoor’s layers: the prehistoric stone rows at Drizzle Combe; gulleys left by medieval tinners; the remains of a 19th-century mine. The route also passes the field where the film unit set up camp (being careful not to disturb an ancient burial chamber), and Ditsworthy Warren House – the Grade II-listed building that became War Horse’s Narracott Farm.

The two main roads that cross Dartmoor intersect at tiny Two Bridges; the land to the north-west of this junction is Dartmoor at its most wild. Unlike many other British national parks, much of Dartmoor is privately owned but designated as common land, with no restrictions on where people can ramble, offering unprecedented access. In the north-west, this access is occasionally compromised.

Three military ranges occupy this open moorland, and entry is only permitted when no live firing is taking place. There are no roads, few footpaths and no facilities. But that’s what makes it special.

“Fur Tor is the furthest point from a main road in southern England – it’s the tor with the most adventure,” says naturalist and TV presenter Nick Baker, recommending a hike to northern Dartmoor’s wildest summit. “When you get there on a clear day, the views give a real sense of sitting on the hub of Dartmoor.”

Getting to Fur, the 572m ‘Queen of the Moor’, is quite an undertaking; likewise many of the northern moor’s other treasures, such as the memorial stone to poet Ted Hughes, the stratified granite of Watern Tor, and Cranmere Pool – birthplace (in 1854) of ‘letterboxing’, a form of orienteering that sees walkers navigate to hidden stamps.

More accessible are the north-west’s edges. Postbridge, in the centre of the moor and home to an old granite clapper bridge, is a good base for exploring the ancient oak dell of Wistman’s Wood and the gunpowder factory ruins (and working pottery) at Powder Mills. From here, the Lych Way – or Way of the Dead – is still walkable. This path was used by 13th-century farmers who were required to carry their dead for burial at Lydford, 12 miles west. Lydford was once a Saxon stronghold; old earth ramparts can still be seen, as well as Lydford’s dramatic gorge and stone Castle, used as a stannary prison until 1800. The old inn next door is reputedly haunted.

This mix of the macabre and the magnificent sums up Dartmoor. It can be fun and fearsome. There are opportunities to cycle disused railway lines, ride ponies across high moorland and scramble over granite stacks. But there are also ‘piskies’ lurking amid the sphagnum bogs to lead bypassers astray (though apparently their dark magic can be warded off by turning your coat inside out).

“I love the beauty and the grandeur of the moor,” concludes Moorland Guide Simon Dell. “I love its curious stories and history, its skylarks and lapwings; I love the wildness and the views across the open moor. I hike in the Himalaya, which is magnificent, but when I get back to Dartmoor, I’m just glad to be home.”

For more information about the national park visit www.dartmoor.co.uk or www.dartmoor-npa.gov.uk/visiting