Ellesmere Port has long been synonymous with industry, yet between the chimney stacks there’s a romantic view. The National Waterways Museum serves as a reminder of Victorian times, with seven acres of restored Grade II listed buildings, docks, locks, stables, workers’ cottages, boats and canal basins open to explore. 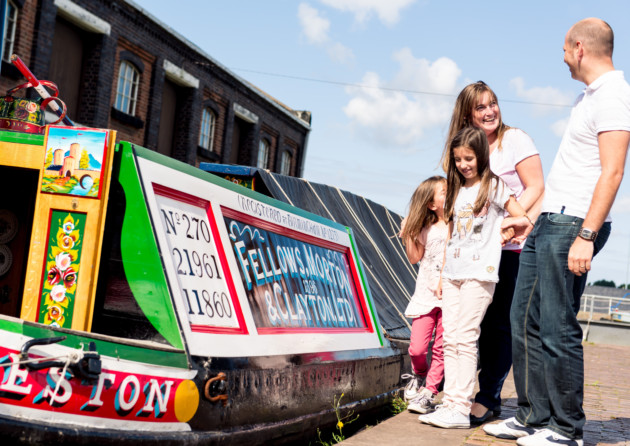 You can step inside a traditional narrowboat at the National Waterways Museum. Photo: Canal & River Trust

Bordering both the Manchester Ship Canal and Shropshire Union Canal, there are also endless opportunities to get onto the water on official museum boat trips. Serene today, and lined with colourful narrow boats, the waterway is also a haven for wildlife. Fun for all the family! Photo: Canal & River Trust

It’s a far cry from the vision of engineer Thomas Telford and William Jessop, who were tasked with creating a profitable, efficient transport network for the increased waterway traffic. Their efforts saw the long use of the port, still operating in the 1950s; the equipment and tools of the trade remained in place, providing the perfect living museum.

A visit is an all day experience, leading through an exhibition that relates the history, from when the canal was built in 1795 to modern-day life in the Port, “A big project that we’re working on is ‘Window on the World’ an exhibition which will bring together people’s memories of the port as it was,” says museum volunteer Mark Ditchfield. “Aside from the Mersey, the dock was the region’s only access to the sea and saw a lot of traffic. Cargoes of pottery were transported via canal – a smoother option for fragile materials – as well as iron, steel and coal. Many barges and narrow boats seen here today had a signature cargo, and were responsible for one type of cargo, such as grain or chocolate.”

The social history of Ellesmere Port tells of a level of distrust and discrimination within the port. The boatmen, many of whom were travellers of no fixed abode, were seen as lower class citizens. For those who did consider the docks a permanent base there were several humble cottages, (a few of which are open to explore), stables to house 300 barge horses, and various workshops where equipment was maintained.

Restoration remains ongoing, although today the old forge doubles as museum and workspace for a local blacksmith, while the onsite Waterways Archive is an exhaustive bank of artefacts documenting the Ellesmere story. Visitors amble leisurely, absorbing centuries of history as they go, and languishing barges await their return to glory.