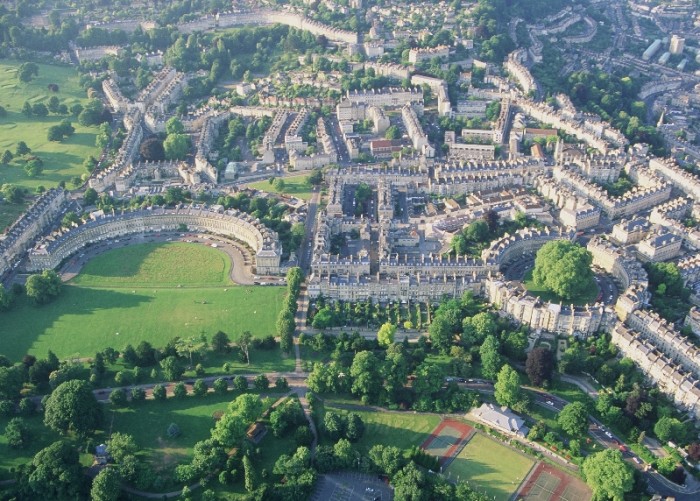 Set amid seven gently rolling green hills at the southern tip of the Cotswolds, Bath, with its magnificent crescents and wonderfully intact Roman remains, is one of the most beautifully preserved cities in Britain. Here Ian White explores Georgian Bath and introduces a few of the city’s historic treasures…

To catch sight of this Georgian gem as you approach it from any direction is always an uplifting experience but perhaps the best way to see it is from the top of Beechen Cliff, which rises steeply above the south side of the city. From here you can gaze upon the rows of uniformly honey-hued limestone terraces winding around the foothills and pick out Bath’s best-known landmarks.

The majestic curve of Royal Crescent, to the north west is instantly recognisable, as is the Circus nearby. These were the two great set-piece masterpieces of the 18th-century architect, John Wood the Elder, who, together with philanthropist Ralph Allen, builder Thomas Baldwin and others, was responsible for not only Bath’s central buildings and streets, inspired by the 16th-century Italian architect Andrea Palladio, but also for the setting for the city as a whole. The view is particularly magical on a summer evening when medieval Bath Abbey is floodlit and the surrounding buildings turn dusky gold against the darkening hills beyond.

Bath’s heady harmony of great Georgian crescents, Roman archaeology and beautiful natural scenery, augmented by Wood’s Palladian design went a long way to persuading UNESCO to list the entire city as a World Heritage Site. Understandably, any plans for new building projects have to contend with powerful preservation bodies, which pick over them with a fine tooth comb and an innate wariness. But, though it’s packed with Grade I and II listed buildings, Bath isn’t completely set in aspic and its popularity as a spa resort goes back long before the Georgians and the Romans laid claim to it.

Legend has it that, in the ninth century BC, Prince Bladud (future King of the Britons and father of King Lear no less) contracted leprosy and was forced to leave the royal court to become a swineherd in the West Country. While driving his pigs across the river Avon, he observed that, after wallowing in a steamy swamp at the bottom of the valley, his charges would emerge cleansed of their warts and sores. Full of hope that these thermal waters might cure him too, he took the plunge and scrambled out, minutes later, blemish free. Bladud returned to his father’s court and, in gratitude for his cure, founded a city at Bath and named it after the Celtic goddess Sul. Nine hundred years later the Romans called the city Aquae Sulis. Many buildings and businesses in Bath are named after Prince Bladud – you can find Bladud Buildings, just off Broad Street and on the eastern edge of the city is a pub called the Bladud’s Head.

Belief in the healing powers of the thermal springs at Aqua Sulis continued to thrive into the first century BC when Iron Age Druids also used it to communicate with the underworld. When the Romans arrived in AD 43, they channelled the hot water and built their most dramatic suite of public baths in an attempt to win local hearts and minds. The baths extend under the modern ground level, beneath adjacent streets and squares. Visitors are surprised to discover just how big the site is. Hot spa water still gushes into the open-air Great Bath through the original Roman channels, causing steam to rise up over the walls and into the Abbey Church Yard, adding a mystical touch to the area at night.

“It is this hot water which has linked, like a golden thread, all the major developments in the city through the ages,” says Barbara Holmes, a Blue Badge Guide with Bath Parade Guides. “Each century, one generation after another has made its mark on the city, building layer upon layer like a vertical timeline of golden eras.”

It’s a little early to guess what impression the 21st century will have on Bath but it’s likely that the new Thermae Bath Spa will be acknowledged as a bold move which, after much-publicised teething troubles (and a final cost of £45 million), achieved great success. In 2006, the ultra-modern health spa complex pushed its way up through the city centre’s Georgian rooftops to meet with both poolside views of Bath Abbey and near unanimous approval. Its glass and stone exterior looks fabulous and slots cleverly into its surrounding cobbled streets. Now Bath’s mineral-rich spring waters have been brought up to an open-air rooftop pool that is open day and night. The experience of letting the naturally warm water envelop you as you float, watching the steam rise into the stars over the chimney-tops of Bath is magical.

Another dramatically successful architectural move was the addition of a glass extension to the Holburne Museum in the summer of 2011. Less celebrated is Bath’s new Southgate shopping centre, which is comprised of larger-than-life faux Georgian pre-fab stone facades and, unlike Wood’s 18th-century masterpieces, features no green spaces at all. That said, it looks a lot better than the eyesore it replaced. In any case, many of Wood’s showcase pieces were themselves façades.

Built between 1767 and 1774, the Royal Crescent appears to comprise 30 identical three-storey Georgian houses in a stately arc, made more grandiose by 47ft high Ionic columns and a long lawn which slopes down to a ha-ha, in front of which is Royal Victoria Park. But the frontage is a façade, albeit a magnificent, gracefully curved one. It was sold in lengths to buyers who would employ another architect to build a house behind it to their own specifications. The rear of the Royal Crescent was (and still is, to some extent) a hotchpotch of different designs, wooden extensions and bolted on lavatories.

Some particularly wealthy folk bought two plots, on which they built one house. The same arrangement applied to the Circus and the twin-plot house in the centre of the Royal Crescent has proved ideal for its eponymous hotel. The casual observer might not even notice it, so discreet is its frontage, but anyone entering its palatial reception will be in no doubt as to its five-star credentials. Most of its bedroom suites are behind the house at the far end of a spacious ‘secret’ garden, which is popular as a venue for wedding receptions and afternoon tea. Meanwhile, Number One Royal Crescent has become a museum-cum-show home for fine Georgian living.

Wood’s new Bath was in many ways the Monte Carlo of its day and, with the considerable help of the legendary gambler and socialite, Richard Beau Nash, lured London’s rich party-goers to the West Country for wild weekends. But what Wood really wanted was to create a neoclassic gem that would invoke the spirits and deities of ancient Britain. Pagan, Masonic and mystical details abound in his work. Many believe that the Crescent represents the moon while The Circus is the sun and Gay Street, which leads down from it to Queen Square is a Masonic key symbol. Wood believed in the spiritual world and may well have found more in common with Bath’s so-called new-age community than the retired colonels, musicians, writers, artists, teachers and independently wealthy people who seem to make up the rest of its population.

Wood died in 1754, before the Circus and the Crescent were completed and it was left to his son, John Wood the Younger, to finish the work. This he did extremely well before moving on to design the Bath Assembly Rooms in 1769. The Grade I listed building is open to the public and includes a 100ft long ballroom (the largest Georgian interior in Bath) a tearoom, a card room and the Great Octagon, which is furnished with paintings by local artist Gainsborough among others.

The Assembly Rooms were the place to be during the social season. Charles Dickens gave public readings here and mentions them in The Pickwick Papers, as does Jane Austen in her two novels set in Bath, Northanger Abbey and Persuasion. Beau Nash would preside over all this out-of-London merriment, parading around like a peacock but, though he may have acted the fop, he was no fool and asked local businesses to pay an extra levy to make sure the city was kept up to high standards of appearance (a practice which still goes on today).

Bath is a small city, with most of its attractions being very close to each other. For example, the Roman Baths are connected to the Pump Room, to the right of which is the Abbey, which is just in front of the Grand Parade that overlooks Parade Gardens, the beautiful River Avon and the enchantingly shop-lined Pulteney Bridge, designed by Robert Adam. Walking is by far the best way to see it and allows you to explore all the little nooks and crannies that you will inevitably come across. And, wherever you are in this engaging city, you can always look beyond the buildings to see an almost unbroken green skyline. Bath really is the perfect blend of natural and architectural beauty.