In celebration of the Queen’s 90th this summer, the June/July issue of Discover Britain is a right royal issue. We visit not one but three of the Queen’s royal residences: Buckingham Palace, Windsor Castle and the Palace of Holyroodhouse. We even pay a trip to Royal Greenwich, where the Queen’s House opens its doors later this year after a huge refurbishment project.

What we hadn’t realised before putting together this issue of Discover Britain is how the stories of other monarchs would recur in the history of these different buildings. For example, Charles II, who redeveloped Greenwich after the English Civil War, moved to Windsor Castle, a safer fortress, to implement changes there as well, so a visit to one of these historic sites informs the other. George IV’s name is another that crops up a lot – playing, as he did, such a crucial role in making Buckingham Palace what it is today, as well as bringing his lavish tastes to the State Apartments of Windsor Castle. As with so much of British history, these iconic sites are not isolated buildings but contain stories that feed into each other: a good reason to visit them all.

But we have simpler pleasures in this issue too – from the rich history of Britain’s quirky pub signs to our new series on the secret lives of London’s unsung heroes, such as our black-cab driver, Paul Kirby. And to mark the arrival of summer, we visit the beautiful Cornish landscape of Daphne du Maurier, the unspoilt rural charm of the Cotswolds and get our diaries out for the highlights of the Season. 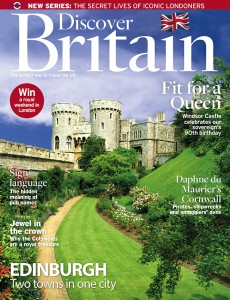 The June/July 2016 issue of Discover Britain is now on sale.