London provided a stage for Oscar Wilde’s greatest plays and a backdrop for his dramatic downfall. Biographer Matthew Sturgis shines a spotlight on the places connected to the Britain’s most infamous and eloquent writer

For Oscar Wilde, London was the centre of existence – of pleasure and of power. It was also the best place to buy cigarettes. Although he may have been born in Dublin in 1854 andwould die in Paris in 1900, it was in the English capital that he made both his home and his name. London was the locale of his keenest hopes and his greatest triumphs. It was the site, too, of his spectacular fall from grace. 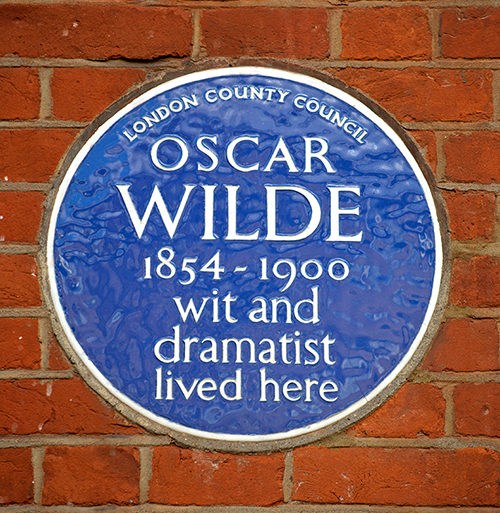 Wilde has left his imprint upon the city. There remain many places touched by his presence. Of course there is Tite Street, the redbrick enclave in Chelsea where he lived – briefly at Number 1, then at what was Number 16 (now 34), in a house that he decorated in collaboration with the great architect-designer, EW Godwin.

It was from a front window of this “house beautiful” (a term Wilde used for his 1882 lecture on aesthetics) that he looked out one morning to be confronted by the sight of the actress Ellen Terry, emerging from a carriage decked in splendid emerald-green robes and a mass of paste jewellery – her costume for the role of Lady Macbeth. She was on her way to be painted by John Singer Sargent, the American artist who had his studio just across the way. It was a never-to-be-forgotten moment. “The street,” Wilde declared, “that on a wet and dreary morning has vouchsafed the vision of Lady Macbeth in full regalia, can never again be as other streets. It must always be full of wonderful possibilities.” To those wonderful possibilities is now added, perhaps, the chance of bumping into the ghost of Oscar Wilde.

It is easy to imagine him, too, in other places across the capital that still exist today: the galleries of the Royal Academy of Arts, where, as the “Apostle of Aestheticism”, he discoursed on art to herds of eager female worshippers in the early 1880s; St James’s Sussex Gardens, the parish church at Paddington with its frieze of pomegranates and sunflowers, where he married the beautiful Constance Lloyd in May 1884; Hatchards on Piccadilly where he bought his books; the Royal Arcade on Old Bond Street where he might obtain the specially- dyed green carnations that he wore in his buttonhole and so annoyed the philistines; the Café Royal where he liked to take his aperitifs; Kettner’s Townhouse (recently restored) where he “feasted with panthers” – or dined with rent boys; the Haymarket Theatre where two of his plays, A Woman of No Importance and An Ideal Husband, received their triumphant premieres; the Cadogan Hotel where – on 6 April 1895 – he was arrested on charges of gross indecency with various male persons; Great Marlborough Street’s magistrates court (now the modish Courthouse Hotel) where he was indicted; and the prisons at Pentonville and Wandsworth where he served part of his two-year sentence.

Yet Wilde’s spirit is perhaps felt most strongly along two distinguished London thoroughfares: the Strand and St James’s Street. Oscar loved the West End – the home of theatre, of fun, of fashion, of grand restaurants and hotels, and of luxurious living. It became his line that no gentleman ever goes east of Temple Bar – the boundary marker beyond which lies the City of London and the grim world of “work”.

When he first settled in London in 1879 after graduating from Oxford’s Magdalen College, Oscar took rooms in a rambling old house off the Strand, in the now-demolished Salisbury Street. And it was from there that he embarked on his campaign of social and artistic conquest.

One of the virtues of his address was its proximity to the Lyceum Theatre, where Henry Irving had established the most exciting company of the day. Wilde idolised Irving, and adored his beautiful leading lady, Ellen Terry, long before she became the vision of Tite Street – among the first works he wrote in London were two sonnets in praise of Terry’s acting. His ambition, though, that she might perform in one of his own plays was not fulfilled. Irving – along with everyone else – was not impressed by either of Oscar’s first dramatic efforts: a clunking melodrama about Russian Nihilists, and a five-act verse tragedy called The Duchess of Padua. Wilde achieved rather more success with his remark that “both Irving’s legs are distinctly precious, but his left leg is a poem”. This piece of fanciful extravagance was repeated in the press, and “amused all London”.

Further along the Strand stands The Savoy hotel where Oscar spent a sybaritic four weeks during 1893 in a suite of rooms overlooking the River Thames. He brought with him his new love: young Lord Alfred ‘Bosie’ Douglas, son of the Marquess of Queensberry – a romanced dramatised in Rupert Everett’s recent Wilde movie, The Happy Prince. Wilde, in funds following the success of Lady Windermere’s Fan, was able to indulge both himself and Bosie without stint. There were sumptuous dinners of “clear turtle soup”, and “luscious ortolans wrapped in their crinkled Sicilian vine leaves”, washed down with “heavy amber-coloured, indeed almost amber-scented champagne”. There were also nights of clandestine sex with various rent boys and pick-ups. The hotel management grew uneasy at this second development, and was relieved when Wilde left – even if he did so without settling his bill.

The amount was still outstanding when Wilde was declared bankrupt in 1895 following his ill-conceived libel action against the Marquess of Queensberry.

To wave us on our way, at the bottom end of the street, opposite Charing Cross Station, stands – or, rather, reclines – Maggi Hambling’s cheerfully idiosyncratic bronze sculpture, A Conversation with Oscar Wilde, with its wistful inscription taken from his play Lady Windermere’s Fan: “We are all in the gutter but some of us are looking at the stars”.

Another lesser-known sculptural image of Oscar can be found just off St James’s Street in Angel Court. The work – a stylised bas-relief – was made by E Bainbridge Copnall in 1957, after the old St James’s Theatre was demolished and replaced by an office block. (That first office block has now been superseded by a second resulting in the removal of the wall plaque to its current unlovely position.) The theatre is a sad loss to Wildean London. It was there that the brilliant actor-manager George Alexander launched both Lady Windermere’s Fan and The Importance of Being Earnest – two of Wilde’s most successful comedies. Alexander, very properly, is also accorded his own commemorative bas-relief in Angel Court.

Wilde relished the worldly and aristocratic elegance of St James’s, much of which remains today. In 1894 he took rooms in a private hotel at 10/11 St James’s Place. It was a place of refuge from the cares and distractions of domestic life. It was there that he wrote most of the playAn Ideal Husband. The rooms also provided a discreet setting for occasional ‘assignations’ – he was visited on at least one occasion by the young rent-boy Charles Parker.

All the shops Wilde required were close at hand. His bank – the London & Westminster – was at 1 St James’s Square. Wilde bought his hats from Lock & Co. Hatters at 6 St James’s Street where it remains today. And he got his personally monogrammed gold-tipped Turkish cigarettes from the tobacconist Robert Lewis – now James J Fox – at number 19. In the shop’s basement museum, you can see the old ledger with Wilde’s orders, along with the judgment that the firm got against him for the non-payment of his bill. As Oscar foresaw so clearly, “It is only by not paying one’s bills that one can hope to live in the memory of the commercial classes.”

It is though by the coin of his genius – as a writer, a wit, a dramatist, a person and a personality – that he lives on in the memory of London itself.

Matthew’s new book, Oscar – A Life, is published by Head of Zeus. It has just been shortlisted for the prestigious Wolfson History Prize.