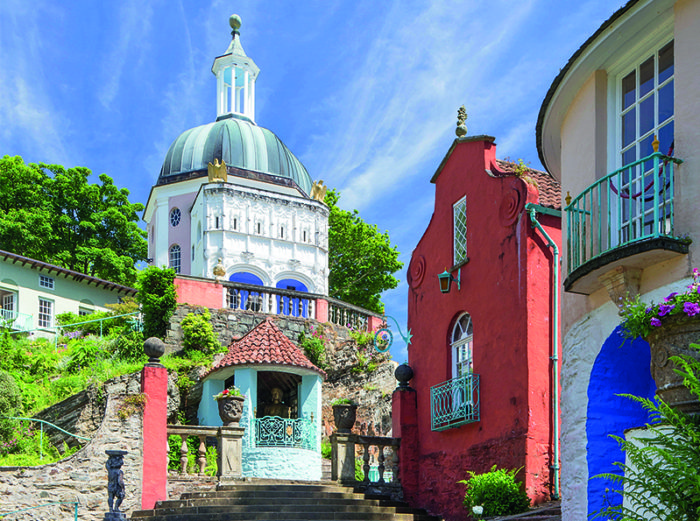 Facts, figures and stories about the picture-perfect Welsh tourist village

Portmeirion is a reminder to always dream big. Bertram Clough Williams-Ellis had long fantasised about creating his own model village prior to acquiring the Aber lâ estate in 1925. The British architect didn’t start from scratch, however, but rather set about moulding an existing coastal settlement into his own vision.

While Portmeirion was conceived as a place for thousands to live or visit and enjoy, it also remained a very personal project for Williams-Ellis. As work on the village first began, he bought the Amis Reunis (or ‘Friends Reunited’), a converted trading ketch that had worked the channel out of the Porthmadog harbour across from Portmeirion. When the boat became inadvertently stranded and damaged on a shoal, he would use the salvaged wood in the dining room of the Hotel Portmeirion, while also creating a huge stone tribute to Amis Reunis that can be visited in the harbour today.

More than these personal touches, Williams-Ellis’s driving motivation was to demonstrate that it was possible to enhance the natural environment with “architectural good manners”. Portmeirion more than succeeded in this respect and began to take on a life of its own. As Williams-Ellis noted in 1977, a year prior to his death, Portmeirion has “taken over from me to stand in my place as I myself recede into the friendly shade of the middle nineties”.

In 1956, Frank Lloyd Wright stayed with Clough Williams-Ellis during his only visit to his ancestral country, Wales. The famous US architect admired the Portmeirion founder’s philosophy.