This October, a new gallery uncovering the fascinating story of the Staffordshire Hoard opens at Birmingham Museum & Art Gallery and will feature the UK’s largest permanent display of the incredible Anglo-Saxon treasure. Hundreds of pieces from the Hoard will be on show, along with hands-on displays exploring how these intriguing items were used, before they were buried some 1500 years ago. Visitors can find out about the exquisite craftsmanship used to create the items in the hoard, and learn how the designs of the objects can be linked to many regions across Europe. Younger visitors will discover what conservators really do. They can get to grips with microscopes and see some of the unusual tools that a conservator uses while working with these precious objects. In addition, visitors can peek into Anglo-Saxon England in the ‘Mead Hall’ showing how a 7th-century Lord and his warriors once lived. Through traditional games, dressing up and story telling, young visitors will get a true feel of what it was like to live in this war-like time. Ellen McAdam, Director of Birmingham Museums comments; “The Staffordshire Hoard is one of Birmingham’s most popular collections, and this new gallery will give visitors an even greater access to this unique find. Last year alone, over 100K people from across the world came to see the Hoard at the museum, and we look forward to welcoming many more visitors in years to come.” 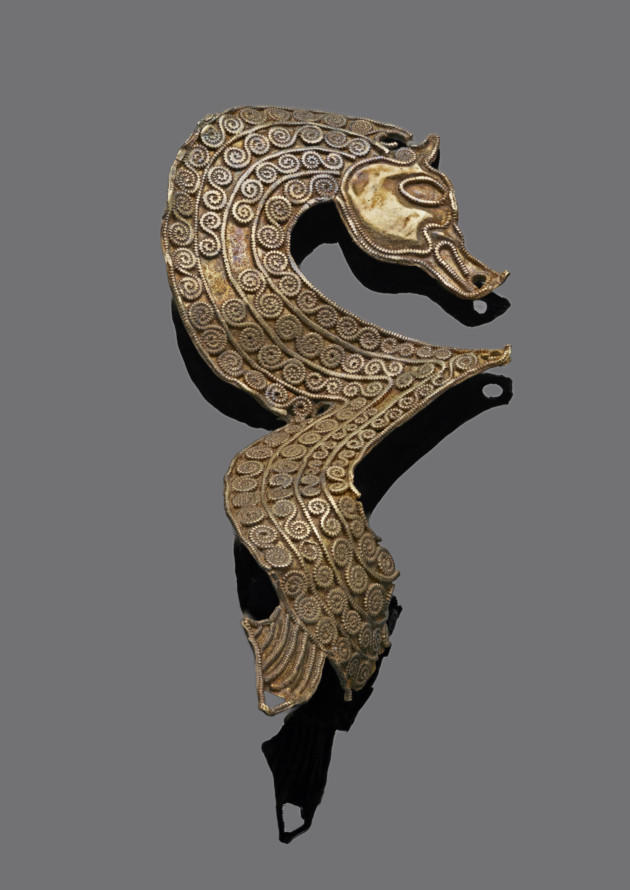 Gold mount in the shape of a horse’s head, with very fine filigree decoration.

The Staffordshire Hoard was discovered near the village of Hammerwich (Staffordshire) in 2009 by local metal detectorist Terry Herbert, with further items excavated by archaeologists in 2012. It remains Britain’s largest Treasure case, and one of the most important Anglo-Saxon finds ever made, consisting of gold, silver and garnet decorative fittings dating to the 7th century AD. Many of the pieces come from swords and other weaponry, but there are also several Christian items, as well as ‘mystery’ objects, which continue to intrigue experts and visitors alike.

The Staffordshire Hoard is jointly owned by Birmingham City Council and Stoke-on-Trent City Council. It was acquired in 2010 with the generous support of the Art Fund and the National Heritage Memorial Fund, as well as the UK’s largest ever, public donation. Development of the new gallery has been made possible thanks to funding by Heritage Lottery Fund, Garfield Weston and Arts Council England. Birmingham Museums Trust is continuously fundraising for the conservation of and research into this unique find.

To find out more visit www.staffordshirehoard.org.uk