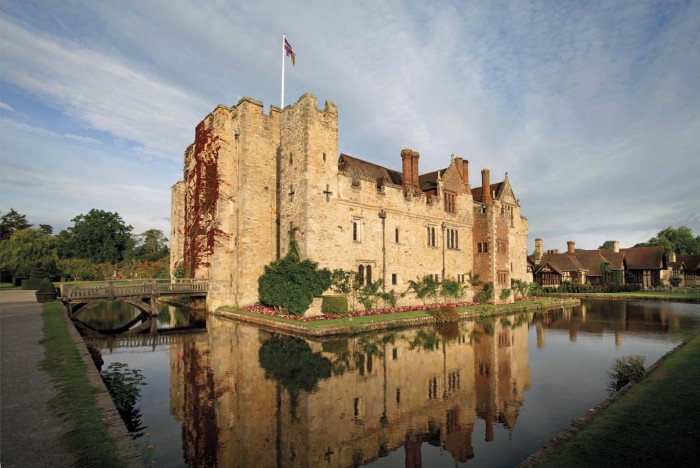 Drenched in Tudor history and intrigue, Hever Castle stands out as one of Kent’s most beautiful gems. Vicky Sartain traces the story of the distinguished line of owners and associates who have shaped its character and raised its profile over 700 years

Among the many heritage treasures in the county of Kent, the idyllic 13th-century Hever Castle is notable as the backdrop for one of history’s most compelling love stories, that of King Henry VIII and Anne Boleyn. As a picturesque stage for their romance, Hever Castle was foremost Anne’s childhood home where she grew up in coveted surrounds within a wealthy merchant family. During his visits, the king would have glimpsed the honeyed stone castellated walls and tall Tudor chimney stacks through the trees on the castle approach, finding the interiors far removed from their medieval origin. This transformation was implemented in 1462 when Geoffrey Boleyn (Bullen), Lord Mayor of London and great grandfather of Anne, acquired the castle and set about turning the stone bailey into a comfortable home, a project that would occupy the family for a century. Their ambitions for the property involved expansion and cosmetic detail fit for royalty, a goal that Anne’s father Thomas Boleyn, successfully achieved.

The castle became an asset of the Crown following his death in 1539, by which time Henry had long executed Anne and was trying to free himself of his fourth wife, Anne of Cleves. As part of a hasty divorce settlement the king bestowed the property upon her, closing the chapter of royal association for ever after. Several families then took ownership, but by the 19th century Hever was in a dilapidated state.

The dawn of the 20th century saw a turn in fortunes when the property was bought by William Waldorf Astor. The American magnate spent vast sums in transforming the site from 1903, glorifying its Tudor interiors. He also further expanded the accommodation, building an authentic Tudor style ‘village’ off the original bailey. This was no amateur project for the ardent historian who sought advice from esteemed architect John Loughborough Pearson, of Truro Cathedral fame.

Astor had also gained experience in grand designs at his other carefully restored properties, one of which was Cliveden, in Berkshire. “Astor relished re-telling Hever’s Tudor story in fine detail, borrowing ideas from stately homes and history books, employing the finest craftsmen and sourcing extravagant period items, from fine Tudor portraits to furniture dating from the 16th-19th centuries,” explains Chief Executive Duncan Leslie.

The cost was prohibitive mainly because Astor didn’t allow the builders to use modern tools for the finishes, insisting on equipment used in Elizabethan and Tudor times

“As an offshoot from the main bailey his Tudor-style extension comprised 100 rooms to house his guests, family and staff. He spent £10-13million (the equivalent of at least 10 times that amount today) on the project between 1903-7.” The cost was prohibitive mainly because Astor didn’t allow the builders to use modern tools for the finishes, insisting on equipment used in Elizabethan and Tudor times. “He had exacting standards, right down to the fine detail,” continued Duncan. “The windows of the Astor Wing, for example, hold hundreds of small panes of glass which were individually cut. However, modern comforts were equally non-negotiable and Astor installed electricity throughout.”

Astor kept many original assets in place, including the 13th-century Gatehouse leading through the courtyard to the Tudor manor house with its heavy oak studded front door to the castle which opens into the Entrance Hall.” Here, what was originally an imposing fortress gives way to a welcoming home, where the first items of furniture encountered suggest informality. Italian choir stalls, Bishops chairs and eye-catching 18th-century Japanese porcelain are Astor additions installed to intrigue his guests.

The Inner Hall was originally the Great Kitchen though little sign of this remains, its bare stone walls covered with elaborate walnut panelling and Tudor paintings of Henry VIII, his sickly son Edward and Boleyn daughters Anne and Mary. Adjacent is the Drawing Room with Astor’s rare period furniture and fixtures and fittings inspired by the Elizabethan panelling at Sizergh Castle, Cumbria. Windows look out over the moat, and on closer inspection it is possible to see floodlines on the walls where the river Eden reached waist height in 1958 and 1968. The floods destroyed much of the contents, including precious family archives, reason enough for the Astors to sell up in 1983.

The top-floor Long Gallery which was used by the Boleyns for entertaining is another example of mixing old and new.

While many of the interiors date back to the early 20th century, there is no escaping the atmosphere of a decidedly aged property, which creaks reassuringly underfoot and requires visitors to mind their head or watch their step where the corridors narrow and the stairwells twist. The top-floor Long Gallery which was used by the Boleyns for entertaining is another example of mixing old and new. Here, the panelling is authentic Tudor while the fine Elizabethan style plasterwork ceiling was restored by Astor’s craftsmen. Astor also installed the beautiful stain glass windows, each depicting coats of arms of different owners of the castle through the centuries. The ghost of Anne is said to appear here every Boxing Day, singing sad songs in an alcove where Henry VIII held court on his visits.

Among the many portraits throughout the property, those of the Queen’s Chamber are most memorable. Henry’s wives stare expressionless from the canvas, each bedecked in the finery of the era. One of the earliest known portraits of Anne is among them. Dated 1550, it was created 14 years after her death.

In the room adjacent two beautiful 15th-century prayer books are further prized items, kept under glass. The first of these so-called ‘Book of Hours’ is inscribed: ‘The time will come’, and signed by Anne as if prophesying her fate. The second treasure is a more modest volume, inscribed: ‘Remember me when you do pray, that hope doth lead from day to day’ also in the hand of Anne. Tradition intriguingly suggests that she took this prayer book to the scaffold.

In the furthest and oldest reaches of the castle is the Gatehouse, where the horrors of suffering and death during Anne’s time starkly contrast against the home comforts seen elsewhere in the house. Ominous items are stored here: torture devices and instruments of execution, which although not used at Hever were nonetheless available during the period. From the iron mask scold’s bridle used to quiet unfortunate nagging females, to numerous beheading swords and spiked neck collars, this cold exhibition space leaves many a visitor searching for a sharp exit.

In the grounds Astor’s artistic licence was more free and easy, retaining the Tudor Garden, while creating lavish Italianate formal gardens. These were designed to showcase Astor’s collection of ancient Greek and Roman statuary, acquired while he was American ambassador to Italy. The sculpture – some pieces over 2,000 years old – and a 38-acre boating lake, best viewed from the loggia, are highlights. Summer visitors can enjoy losing themselves in the yew maze or within acres of potent floral displays and manicured lawns.

“Although the Boleyn’s garden would have been on a more modest scale, the rose walks of the Tudor Garden would doubtless have contributed to the blossoming romance of young Anne and Henry,” says Duncan. “Henry had a hunting ground nearby and would have enjoyed his visits to the area immensely, whether to pursue deer or Anne!”

Summer visitors can enjoy losing themselves in the yew maze or within acres of potent floral displays and manicured lawns.

The gardening team is in the midst of a seven-year project to bring some forgotten corners into the limelight. “We’re rediscovering lost views which visitors will be able to enjoy for the first time this year,” explains Head Gardener Neil Miller. “It’s part of a long-term plan to restore the gardens as they were during Astor’s day, using old documents and photos to guide us.” If stories are to be believed it seems that these plans are being overseen, perhaps even by a spectral Astor himself. “Many of the team have reported the sudden scent of old-fashioned tobacco smoke on the air as they weed, dig and design, although I haven’t experienced it yet,” Neil admits.

Of all the beauty of the garden, the rose garden is the flagship. With over 4,000 rose bushes, among which is the recent addition of the Hever Castle shrub red rose, launched in 2011 by regular celebrity visitor, Dame Judi Dench.

Elsewhere in the grounds a Japanese teahouse is being built on the site of an earlier folly in recognition of the castle’s 50th anniversary since opening to the public. The building which was removed during the Second World War, will once again sit on the 16-acre island at the centre of the boating lake, just as it would have looked in the 1930s when the Astors enjoyed lazy afternoons there picnicking and enjoying the views. This year it will be accessible to visitors by boat, offering an interactive experience that cleverly blends heritage with family fun. Here and across the property Hever’s charms unfurl with the rose buds for a new season of spectacle and wonder.