Following the completion of a major restoration project at Hampstead Heath’s magnificent stately home, the rejuvenated interiors of Kenwood House provide a fine backdrop for its internationally renowned art collection The welcoming open fire in the grate and warm rug on the floor in the entrance hall make it immediately clear that Kenwood House is back to being a home – albeit a historic one. For many years it has been primarily an art gallery – housing one of the most important private collections of paintings in the country. Now a restoration project costing nearly £6m (£3.9m from the Heritage Lottery Fund) has not only secured the roof and other parts of Kenwood’s historic structure, but also given the house back its domestic context and restored its famous Robert Adam rooms, while retaining and enhancing the exceptional art collection at its heart. From the walls of the front hall which once doubled as their dining room, Lord and Lady Mansfield look down on the arrival of their latest guests. Mansfield, then plain William Murray, a leading lawyer and Member of Parliament had just been appointed Attorney General (chief legal advisor to the crown and government) when he bought Kenwood in 1754. Two years later he was appointed Lord Chief Justice and First Earl of Mansfield. Kenwood House originally dates to the early 17th century with the Orangery added around 1745. Mansfield however was set to transform it. “Silver-tongued Murray” is often described as Britain’s greatest lawyer, in particular for his judicial ruling that effectively outlawed slavery in Britain six decades before its official abolition. 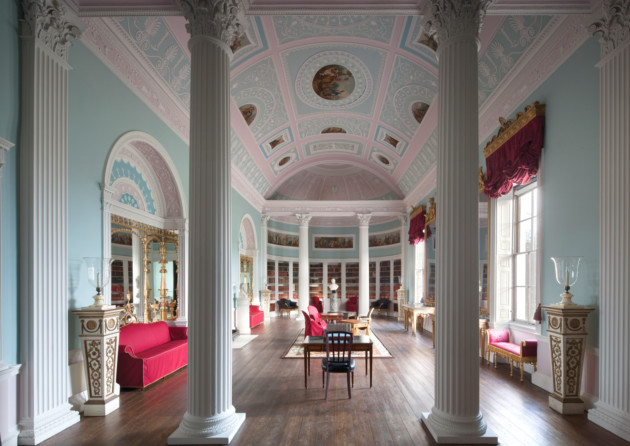 Very unusually for the time, Mansfield and his wife brought up a mixed race relative at Kenwood. The Mansfields had no children of their own but raised two great nieces, Elizabeth (daughter of Mansfield’s nephew and heir) whose mother had died when she was six, and Dido Belle, the half Jamaican daughter of Mansfield’s other nephew, a rear admiral in the Royal Navy. Dido arrived at Kenwood aged just five and lived here for 30 years until her marriage. Whilst the girls were not treated identically, Dido was part of the family and there is a delightful double portrait of the two cousins with the view from Kenwood House behind them.

Mansfield was a celebrity. Souvenir portraits of him were sold to the public and junior lawyers wandered near Kenwood (sometimes then written Caenwood) hoping to meet the great man. He entertained many of the nation’s most prominent people, from the Prime Minister down, so it was fitting for him to have his home remodelled by the most fashionable architect of the day, Robert Adam, Architect of the King’s Works.

Adam turned the house into a neoclassical villa. He worked on it from 1764, adding the portico, redesigning the front hall and great stairs and building the ante-room and the library to balance the orangery. He was enthusiastic about the setting, the view over London and the “mountainous villages of Hampstead and Highgate”. “The whole scene,” he wrote, “is amazingly gay, magnificent, beautiful and picturesque”. He was proud of his work here, too, and especially of its centrepiece: Mansfield’s Library or ‘Great Room’.

Using 500 paint samples, a newly found 1796 inventory and some of Adams’ design drawings this room has now been beautifully restored to look as close as possible to Adam’s original. The result is a much calmer and more subtle décor than this room has seen for many years. The extensive gilding – historic but, it now transpires, not original Adam – has almost all been covered up (though carefully preserved beneath removable layers). The room has been returned to Adam’s gentler white with light pinks, greens, and blues, highlighting the decorative plaster mouldings in a way reminiscent of the contemporary work of ceramicist Josiah Wedgewood (also, incidentally, an opponent of slavery).

This was not a library for private study. “Books are banished to the apses,” points out curator, Susan Jenkins. The room was designed to impress Mansfield’s visitors – and it did. From very soon after it was built, it featured in magazines and journals as one of the finest interiors of its day. Now, for the first time in decades, the rope barriers have been removed and modern visitors can enjoy the room as 18th-century guests once did, sitting on reproduction period furniture to read booklets about Mansfield’s legal achievements and admire the original Adam mirrors and window seats – one of which has just been repurchased for the house after being traced to the USA.

In the early 20th century, the last Mansfield left Kenwood, returning to the family seat at Scone Palace in Scotland. The estate was nearly sold to developers – saved only by a local campaign. The contents however were sold at auction in 1922. Today’s curators have scouts around the world, and especially in America, looking out for any pieces that could be returned to their London home.

When the first Earl died, his nephew inherited Kenwood and immediately set about making the estate his own. He had the road, Hampstead Lane, diverted away from the house, creating the long wooded driveway, and commissioned leading landscape architect Humphrey Repton to rework the grounds. The first earl had merged four fish ponds to create what was known as the “Thousand Pound Lake” (referring to its cost) with a white bridge across one end making it look as though a river flowed by.

A pleasant walk to the lake and along the path behind the bridge reveals that it is actually a sham – a stage set rather than a real bridge. Repton was not impressed: “It is a deception so frequently liable to be detected, I think it is an object beneath the dignity of Kenwood”. Fortunately for those of us who have grown up enjoying “the bridge that isn’t”, the Second Earl disagreed.

The new Earl, a former ambassador to Vienna and Paris, wasted no time in aggrandising the house, however. Between 1793 and 1796 he built a vast new service area (now the café) and two new wings to the house – a dining room wing and a music room. These now house the most important pictures in the Kenwood collection including an iconic Rembrandt self-portrait, an early Turner and a rare Vermeer, The Guitar Player, just back from an exhibition at the National Gallery. The picture may be of Vermeer’s daughter. It was given to the baker to settle a bill when times were hard after the artist’s death, but his wife later bought it back.

Kenwood’s paintings almost all come from the Iveagh Bequest: 63 from the collection of Lord Iveagh, a member of the Guinness brewing family, bequeathed to the nation along with the house on his death in 1927. The bequest stipulated that the collection was to be housed at Kenwood and opened to the public for free. So we have Lord Iveagh to thank not only for the estate with its idyllic walks, the house itself and its fabulous artistic contents but also for the lack of an entry fee!

Iveagh was a multimillionaire businessman collecting for his own pleasure and status. He bought most of the paintings between 1887 and 1891, just ahead of the big American collectors (Frick, Mellon et al) who would certainly have snapped up much of what is now at Kenwood. Iveagh focused on portraits and landscapes by Dutch and Flemish masters of the 17th century (Van Dyck, Frans Hals and Frans Snyder as well as Rembrandt) and the 18th-century British artists who followed them, including Sir Joshua Reynolds (founding president of the Royal Academy and a Guinness favourite), George Romney and Thomas Gainsborough.

Kenwood’s Music Room is a rich display of Britain’s society beauties of the 18th century depicted by its leading portraitists. Men are noticeable by their scarcity. In one of Gainsborough’s most accomplished portraits, Countess Howe is seen full length in burnished pink with translucent lace owing much to the Flemish painters whose work hangs on the other side of the house. Emma, Lady Hamilton (famously mistress of Admiral Lord Nelson), can, on the other hand, be seen in the South Front Rooms, painted by Romney sitting affectedly at a simple spinning wheel.

The South Front Rooms – once Lord and Lady Mansfield’s private quarters – have been redecorated to finally fulfil Lord Iveagh’s wish that they should resemble “a fine example of the artistic home of an 18th-century gentleman”. The rooms now feel more like part of the house, although they remain primarily a picture gallery displaying such gems as Joseph Wright of Derby’s dramatically illuminated Two Girls Dressing a Kitten by Candlelight (incidentally painted in the same decade Adam remodelled the house), an evocative John Constable sketch of Hampstead Heath (purchased after the bequest) and a long thin 1630 panorama of Old London Bridge by Claude de Jongh. If you look very closely, you can even see the tiny heads of traitors  on spikes.

The new refurbishment has not forgotten that homes must also cater for the younger generation. The Orangery is now full of family activities, with Kenwood games and puzzles, explorer backpacks and a family trail. And for the young and young at heart, the Housekeeper’s room has been appropriately given over to a giant Kenwood dolls house. Here all can play at redesigning and re-presenting this finest of London’s ‘country’ houses, where the curators now invite us all to make ourselves at home.

The release date of the film ‘Belle’, which was inspired by the story of Kenwood’s former resident, is 13 June (UK cinemas). www.filmdates.co.uk/films/6655-belle/