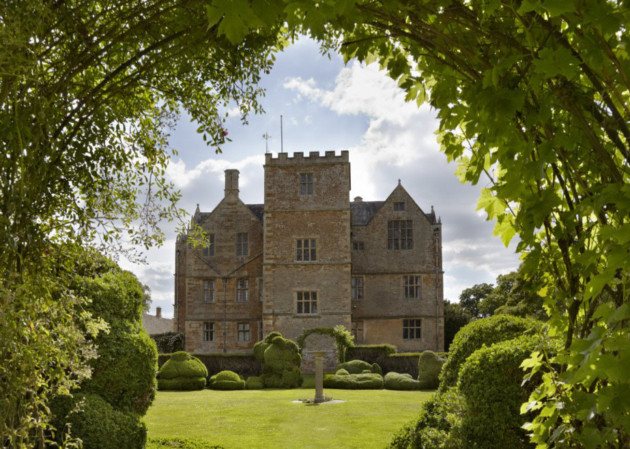 Bristol Cathedral is the setting for one of Wolf Hall’s happier scenes, standing in for Westminster Abbey at the coronation of Anne Boleyn (Claire Foy). The crew filmed this scene in the nave, using CGI effects to make the 140 extras dressed in Tudor costume look like a crowd of thousands. They also used the Chapter House as the office of the Duke of Norfolk. The cathedral was built in around 1140 as an Augustinian Abbey, and the beautiful Chapter House and Abbey Gatehouse are rare survivals from this era. The medieval nave, which was being rebuilt in the 1530s, was never finished as Henry VIII dissolved the abbey in 1539. The cathedral functioned without a nave until 1868, when it was rebuilt in Gothic revival style echoing the original medieval features of the building’s east end. Relatively unchanged for nearly 400 years, this Jacobean gem was built between 1607-12 by a prosperous wool merchant. As the family became increasingly impoverished they struggled to maintain the house, which took on a wild and neglected atmosphere. They sold Chastleton to the National Heritage Memorial Fund in 1991, who in turn donated it to the National Trust. During the filming, the property’s small stone courtyard stood in for the scenes depicting the miserable upbringing of Thomas Cromwell (Mark Rylance) in Putney, and the interior became Wolf Hall itself, the place where Jane Seymour first catches Henry’s eye. The spacious rooms of Barrington Court in Somerset are bare of furniture and collections, making them a versatile setting for the Wolf Hall crew to dress as York Place (later Whitehall), the home of Thomas Cromwell’s mentor and friend Cardinal Wolsey. The Lyle family bought and restored the derelict house in the 1920s, installing their collection of historic wood panelling throughout, and joining Barrington’s two buildings, Court House and Strode House, which was originally a stable. Renowned garden designer Gertrude Jekyll advised the Lyle’s during their garden restoration, and the beautiful garden ‘rooms’ seen today owe much to her inspiration. The blossom in the recently restored Goose Orchard is stunning in spring, and the apples grown are used to produce traditionally made apple juice and cider.

Once owned by Henry VIII himself, who used it as a hunting lodge, Penshurst Place and Gardens in Kent was used for filming some of the scenes set in Whitehall, Henry’s London palace. The house has been owned by the Sidney family since it was gifted by Henry’s son, Edward VI, to his steward and tutor Sir William Sidney. The house has changed little over the last 600 years, and the Long Gallery used for the filming of Wolf Hall remains historically accurate to the Tudor period. Penshurst has 48 acres of grounds to discover, and the Grade I listed gardens have records dating back to the 14th century, making them some of the oldest privately owned gardens in the country.

Anne Boleyn’s execution, the dramatic closing sequence of the series, was filmed at Dover Castle to avoid the crowds in London. A scaffold was built next to the castle’s Great Tower for the scene, which took two days to film. Dover Castle has guarded England’s shores from its dramatic position on the White Cliffs for 20 centuries. William the Conqueror hastily converted the old Saxon fortified settlement on the site into a Norman timber and earthwork castle after his victory at Hastings in 1066, and the castle was garrisoned continuously from this point until 1958 – a record equalled only by Windsor Castle and the Tower of London. Dover Castle also stood in for Calais Castle in Wolf Hall.

5 of Britain’s best (and worst) fathers