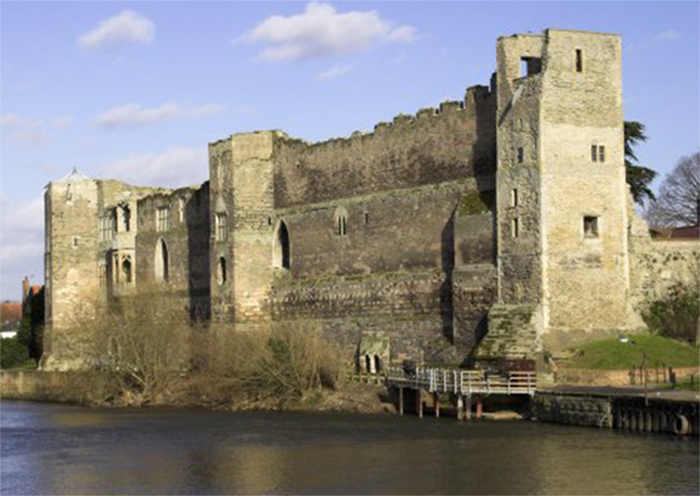 Explore the dramatic ruins of this important Civil War landmark, a fortress which hides many secrets. Dominating the setting as you cross the Trent bridge, Newark Castle rises up impressively from the riverbank, appearing more complete than is truly the case.

On its lofty spot rising above the Saxon-age settlement, the fortress seen today is a 12th-century version of the original 10th-century fortified manor. A motte and bailey earthwork took shape, rebuilt from 1123 by the Bishop of Lincoln into a magnificent stone edifice. It became known as the ‘Guardian of the Trent’ and the ‘Old Grey Lady’, and such was invincible throughout the centuries during several sieges; the 13th-century curtain walls were near impregnable while later Tudor additions of fireplaces and large windows created more of a habitable palace. The kings of old felt secure here – though it was also the site of King John’s agonising death from dysentry in 1216.

During the English Civil War the castle was the last royal stronghold and held out admirably against Parliamentarian forces, despite heavy bombardment, until the king himself gave the command to surrender in 1646. The castle stands in ruin today following its dismantling by the combined hand of Cromwell and locals looking to build their own homes. The grounds fell into the hands of nobility in ensuing years, until 1836 when it was released from the Crown, all bar the castle itself. While the grounds found alternative and occasional use as a market space and recreation area, complete with public gardens and a new library opened in 1885, the fabric of the old fort remains intact, complete with historic graffiti.

Originally lime-washed, the bleached stonework has since softened to a barley hue; and on closer inspection around the gatehouse look out for the blackened marks on the curtain wall – a sure sign of an explosion. Bullet holes from Civil War muskets and cannon ball damage is visible on the exterior walls too, desperate attempts to bring down walls up to nine metres thick. Tours explore the towers and undercroft, where the fashions in architecture are clearly visible: Norman, Tudor and Victorian and views unfurl for miles across the countryside as far as Southwell Minster; down in the dungeons, the latter very grim and famously haunted. If venturing here, watch your footing as you descend into darkness…

Getting there: By car, Newark is skirted by the A46, A1 and A17. By train, there are two stations: Newark Castle (close to the tourist information centre and a short walk to the castle) and Newark North Gate.

Don’t miss: a guided tour into the dungeons into which the condemned were thrown and tortured: expect to scale a couple of steep ladders. Call the Newark TIC for details on 01636 655 765.