The interiors at 575 Wandsworth Road are so visually rich and unexpected they cannot fail to delight the eye. 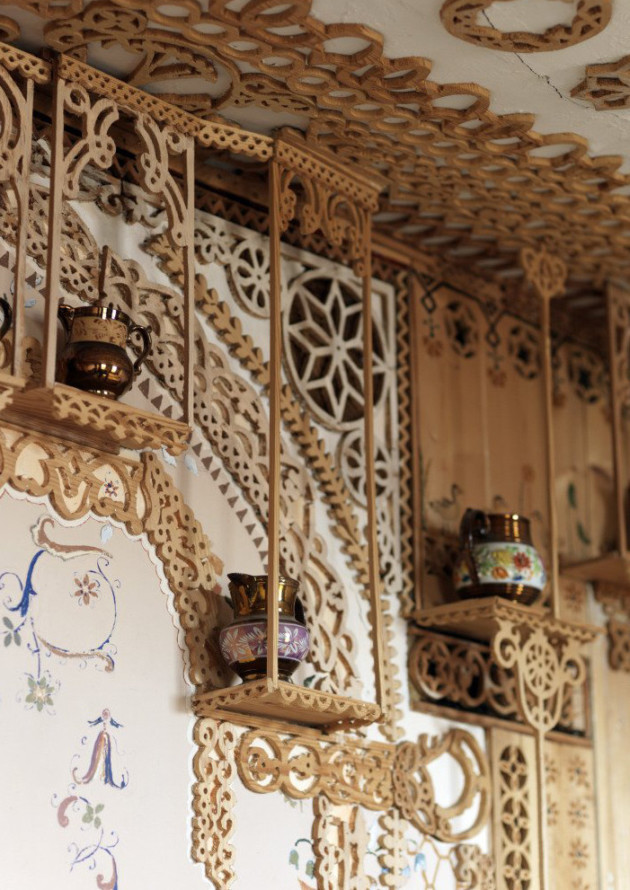 The commercial laundry next door was to blame. Water from the washing machines was seeping into the concrete floor and rising up the adjoining wall to a height of almost two metres. Having just moved in, the house’s owner, Kenyan-born poet, novelist and philosopher Khadambi Asalache (c.1835–2006), tried to eradicate the problem. A few failed attempts led him to adopt what he called a ‘head-in-the-sand’ approach. Using floorboards found in a nearby skip, he covered up the offending damp patch. However, unhappy with the resulting plain surface, he decided to adorn the boards with his own hand-carved fretwork. And from these small beginnings came a thing of great beauty. 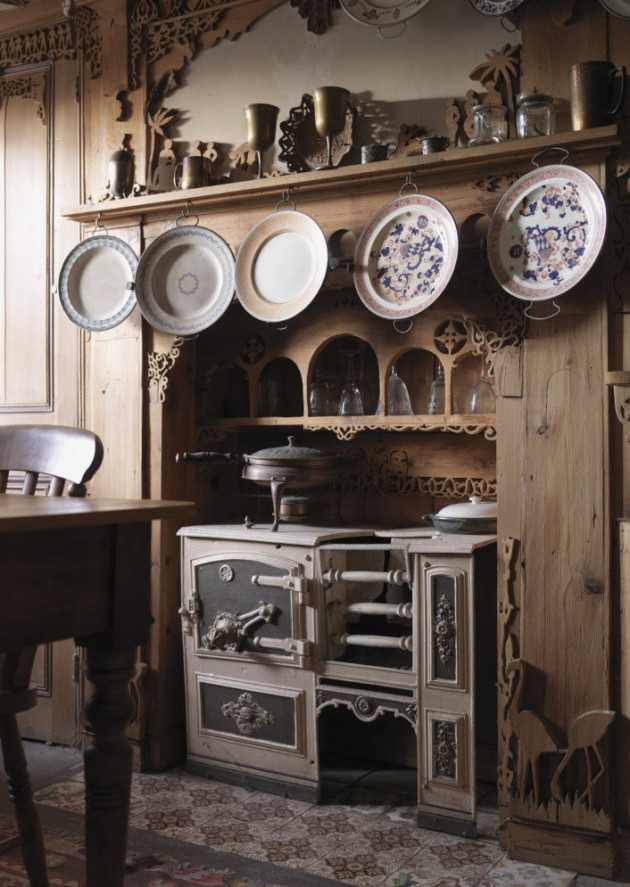 Using a simple padsaw, Khadambi painstakingly carved length after length of decorative fretwork. From 1986 to 2005, he adorned one room after the other of his small Regency home. By the end of the process, he had created his own private paradise, an exotic oasis in south-west London.

Khadambi applied his hand-made lace-like fretwork with joyful abandon. He adorned walls, doors and ceilings, fireplaces and kitchen cabinets, radiators and light switches, bookcases and cupboards. He designed his own fretwork tables and lampshades, and adapted old pieces of furniture to suit his decorative scheme. Every room in the house was suffused with the same delicate touch. “The knowledge that there is no symmetry in nature made me think of harmony, not in terms of symmetry, but in terms of visual balance,” he once explained. The dynamism, intricate delicacy and at times witty subject matter of the fretwork means the eye is kept moving in an almost endless quest ‘to take it all in’. And the more you look, the more you find.

Born in western Kenya in about 1935, Khadambi was the eldest son of a local c 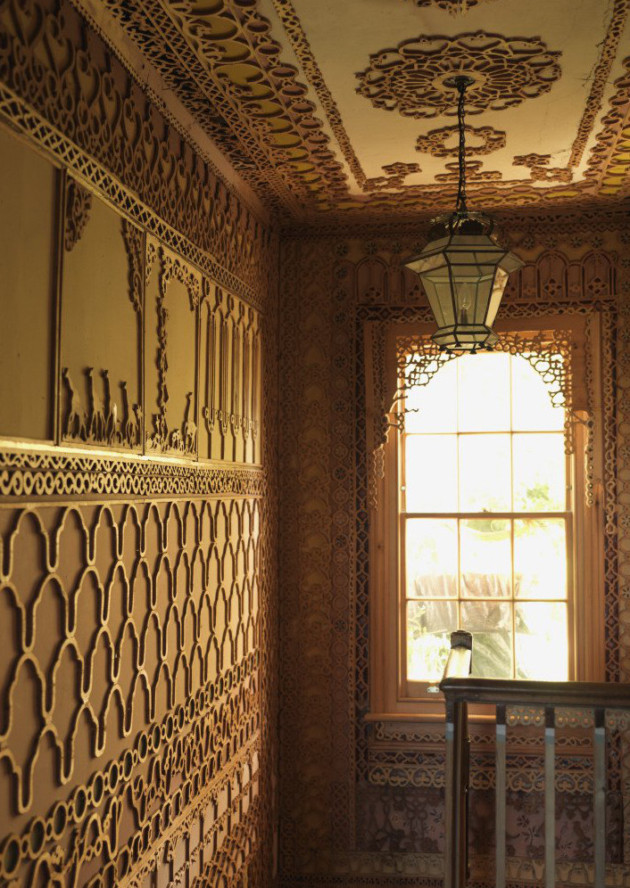 hief. As a child he showed a precocious interest in literature and the arts and is said to have read Shakespeare while herding cattle. After school, he studied fine art and architecture in Rome, Geneva and Vienna. In 1960 he moved to London, where he stayed for the rest of his life. During the 1960s and early 1970s, Khadambi focused on his literary career and wrote a critically acclaimed novel, A Calabash of Life. He wrote poetry too, which was broadcast on Radio 3 and appeared in a number of publications including the Times Literary Supplement. In 1973, his volume of poetry, Sunset in Naivasha, was published. In the mid-1970s he joined the civil service and worked for the Treasury.

In 1981, he moved to 575 Wandsworth Road. The house, ideally located on a direct bus route to his work, was in a parlous state. The previous owners had kept a horse, pigs and chickens in the tiny back garden and had clearly not looked after the house. But none of this stopped Khadambi. ‘It was quite magical, when I saw it, I thought – I can do something with this.’ Which, indeed, he did.

How did the house come to be in the hands of the National Trust? Khadambi never created the interiors for posterity. He designed them for own enjoyment and for that of close friends and family, and it was they who urged him to leave his home to National Trust when he died. The Trust was delighted, believing it to be ‘a great work of art and an important part of our built heritage’.

In the years before it was opened to the public, the Trust made no substantial changes to the appearance of the house but undertook much behind-the-scenes conservation work. Unsafe ceilings were held up by steel joists from the roof. The panelling and fretwork on the damp wall were carefully removed to enable a dry-lining membrane to be introduced. And the house was installed with the most sophisticated fire protection of any Trust property.

Guided tours are both intimate and informative. Each group features a maximum of six guests, who are invited to sit at the large dining table and take in the atmosphere while their guide introduces the house. Once this has taken place, they are invited to explore the house at leisure.

On the west-facing wall of the dining room is the first fretwork ever carved by Khadhambi. As his work progressed, the decoration became more and more layered and complex. He added carved niches to his schemes, which, he later realised, were very similar to those known as zidaka, on the island of Lamu, off the Kenyan Coast. In both cases the niches are beautiful in their own right and also functional, their purpose being to hold prized possessions. Here in the dining room Victorian hotplates and etched drinking glasses help enhance the beauty of the fretwork – and vice versa.

Every part of the design had its genesis in Khadambi’s mind. He made no preparatory drawings or plans. Instead, he drew each simple design directly onto the wood. The interiors combine African, Indian, Moorish and Ottoman elements. He acknowledged the influence of the Alhambra in Granada, the Great Mosque at Cordoba, and the intricately decorated sea mansions at Yali on the shores of the Bosphorus. Far from being a collection of disparate elements, the decorative scheme works as a uniquely blended whole. It is a personal synthesis.

Perhaps surprisingly, the fretwork successfully extends to more practical areas of the house, such as the kitchen and bathroom, and integrates well with more modern and functional elements including the contemporary kitchen, sink, radiators and light switches.

In the bathroom, Khadambi painted an interesting and varied selection of heroines – Pocahontas, Sappho, Bessie Smith, Madame de Pompadour and Anna Pavlova – demonstrating the breadth of his learning. Fittingly, the room was designed to be viewed from the bath.

The most mesmerising space in the house has to be the sitting room. Here the fretwork complements the rich variety of decorative artefacts, including inkwells, postcards, bracelets, neck rests, Senegalese hangings, kilim cushions and early 19th-century pink and copper lusterware. One could easily spend a few leisurely hours here, marvelling in all the detail. Clearly, objects were placed where they looked best. Glass inkwells glimmer in the midday sun. Light streams through a fretwork lampshade, creating shimmering gold patterns on the copper dishes. All is warmth and atmosphere.

Rather than stick to abstract pattern, Khadambi also relied on representational features. The decoration ranges from stars, arabesques, trefoils, arches and hearts to masks, dancing silhouettes and animals such as flamingos, giraffes and gazelles. “Sometimes ideas for designs come to me from incidents in my daily life,” he confessed. The frieze of ballerinas with gliding swans above the mantelpiece was, for instance, inspired by a recent performance of Swan Lake.

Dynamic and ever changing, the fretwork leads you seamlessly throughout the house. Follow it up the stairs and, as you reach the top, you’ll notice a small painted scene of Thomson’s gazelles on the skirting board. Khadambi created it for his partner’s Tibetan spaniel as a little visual treat on its way to its bijou kennel in the main bedroom!

Upstairs, Khadambi relies more heavily on painted decoration. In the Small Bedroom, the vibrant patterns on the floor reflect those of kilim rugs, while the scenes on the walls act like large-scale photo albums of Khadambi’s travels. The panorama above his bed depicts a voyage he made to Egypt.

In the Main Bedroom, you might like to try lying on the floor to get the full effect of the ceiling fretwork. Notice too the fretwork ‘net curtains’ and the tiny inserted fretwork panel in the lamp, no doubt placed there to add to the light effects in the room.

575 Wandsworth Road is not your usual National Trust property. There is no impressive entrance hall or lavish drawing room. There are no grand master paintings or prized objets d’art. Instead, the house itself is the work of art – one which bursts with such visual richness and delicacy that it touches the soul. As one visitor remarked, “It’s a small house with a long journey inside”.

Admission is by guided tour only. Pre-booking essential on 0844 249 1895. www.nationaltrust.org.uk/575-wandsworth-road