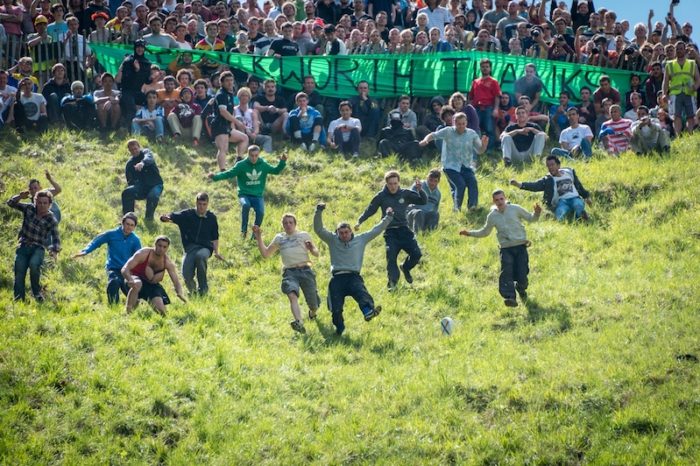 Britain is a nation of cheese lovers. The average Brit consumes almost 14lbs of the stuff each year and there is barely a corner of the country that doesn’t produce its own speciality. Cheddar, Caerphilly, Red Leicester, Shropshire Blue – more than 3 billion litres of milk go into the creation of more than 700 varieties every year. 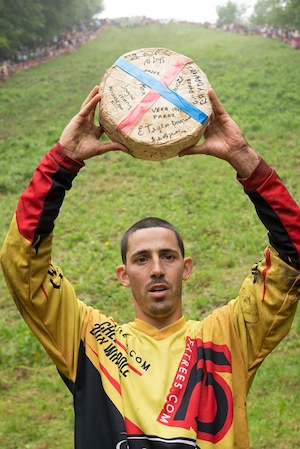 And our cheeses are growing in popularity worldwide too. Annual exports rose 13.5% in 2018 to more than 15,000 tonnes. Last February, British cheeses received top billing for the first time at France’s leading cheese and dairy fair,

Le Salon du Fromage et des Produits Laitiers in Paris. It is little wonder then that such a cheddar-mad nation would go to great lengths to get hold of a good cheese.

However, even the most committed turophile – or cheese lover – might draw the line when it comes to taking part in the annual Cooper’s Hill Cheese-Rolling. This wonderfully eccentric event takes place every Spring Bank Holiday in the Gloucestershire village of Brockworth and sees dozens of eager participants hurl themselves down a hill in pursuit of an 8lb wheel of cheese.

While the real aim is grabbing hold of the runaway dairy product, most cheese rollers  are simply content to make it to the bottom with all limbs intact. The wheel gets a one-second head start and can hit speeds of up to 70 mph, so injuries are common as cheese rollers tumble down the bumpy, 1:2 gradient hill. The official competition was even cancelled in 2010 following health and safety concerns. Eager participants have maintained the annual tradition unofficially ever since as thousands watch from the sidelines.

The origins of the race are rather sketchy. The first recorded mention came in 1826 though many believe it is a pagan folk tradition dating back to the 15th century.

It is thought the cheese was initially either an offering to guarantee a rich harvest or a substitute for a wheel of burning brushwood to mark the coming of a new spring.

The event’s popularity has spread in recent years, with races won by cheese rollers visiting from as far afield as Nepal, Australia and the USA. Four or five rolls take place on each bank holiday, including a ladies-only race. The undisputed champion of recent times is Chris Anderson, a local infantry soldier, who has emerged victorious in 22 cheese rolls to date. He tore a calf muscle in his final race of 2018, yet survived to claim a record 22nd wheel of Double Gloucester. The ultimate irony, of course, is that Chris only eats cheddar.