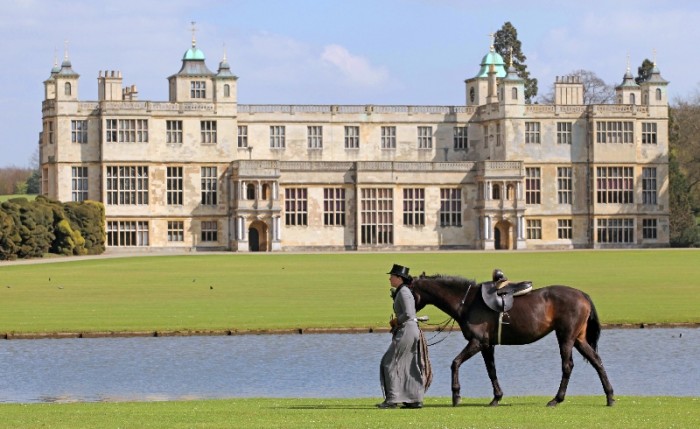 Built on the foundations of a Benedictine monastery to become one of England’s grandest country houses, the Jacobean mansion of Audley End has been shaped by royalty, duty and frailty, writes Vicky Sartain

Viewed from across its ornamental lake, Audley End gleams in a weak morning sun. This prodigy house constructed of Ketton stone rises from pristine lawns, its surrounding acreage dotted with towering trees, fragrant flowerbeds and a kitchen garden cultivated in the fashions of the 19th century.

On the property’s special event days when costumed actors busy themselves with typical period activities above and below stairs, it feels almost as if no time has passed. The contents of copper pans simmer on the stove; maids scurry in the kitchens; gentlemen stride purposefully through the library; ladies sit quietly with their needlework. Life at Audley End never stops.

Grand as it may seem, the mansion today is actually a small part of the original. A plan of the house dated 1676 shows the parterre immediately behind the house as an enclosed courtyard; to the front lay a larger affair framed by covered open arcades and service areas, the domain of the estate workers. It is said that it would have taken one lowly employee a whole day to open the shutters on the property’s many windows.

Built on the foundations of the 12th-century Walden Abbey, Audley End provided a relatively quiet existence for a group of Benedictine monks until Henry VIII tore England away from the Roman Catholic Church. The abbey was granted to one of the king’s most loyal subjects, the chancellor Thomas, Lord Audley who converted the abbey into a vast home in 1538. His efforts would later be challenged by his grandson Thomas Howard, 1st Earl of Suffolk, who demolished the property (to his later ruin and disgrace) in place of a mansion fit for a visit from James I in 1614. The king was at least impressed by its grandeur – although not by the embezzlement of vast sums to pay for it, famously describing the property as ‘too much for a king, but it may do very well for a Lord Treasurer’. Despite James’s assessment,

Charles II fell under the spell of Audley End and purchased the house from the Howard family in 1666, who, following Thomas’s fall from favour were suffering financially. Factors in the king’s enthusiasm for the building were its proximity both to Newmarket racecourse and allegedly to his mistress Nell Gwynn, who resided in the nearby village of Newport. Despite his extra-marital activities Charles II installed his wife, Catherine of Braganza at Audley End. However, for all his initial gusto his interest gradually waned and his successors showed even less loyalty to the property, sealing its fate.

Following the departure of royalty Audley End was restored to the Howard family in 1701 but by then it was already badly in need of repair, its roof and walls crumbling. With money tight, it was decided to demolish sections of the buildings in stages over a 50 year period. Architect John Vanbrugh was instrumental in this modest recreation. Prudent spending kept the property well maintained from the mid 18th century onwards in the hands of Elizabeth, Countess of Portsmouth who further reduced the property. Later the talents of architect Robert Adam were employed and he added galleries linking two wings of the house and a suite of reception rooms on the ground floor as commissioned by Elizabeth’s nephew Sir John Griffin Griffin, who had inherited the property in 1762. The decayed formal grounds were changed at this time too by Lancelot ‘Capability’ Brown whose vision led to the natural landscape seen today. Not to be outdone, Adam added a number of ornamental structures in the gardens, including the Tea House Bridge, Adam Bridge and Temple Of Victory, which cleverly draw the eye when viewed from inside the house. Both house and garden are an unofficial gallery of items amassed over the centuries, latterly by the Braybrooke family who took ownership in 1797 and were the last owners before the nation took possession in 1948. The Jacobean character we see today owes much to this family’s efforts.

On arrival today, the Great Hall gives an indication of the treats in store. Formerly a room where servants dined, by the mid 17th century the space became a reception area styled to impress. The Jacobean carved oak screen is still a showstopper within the ceremonial heart of the house, the ornate design teasing the eye with curves and symmetry. Those craning their necks will make out the family crests adorning the ceiling; the walls are lined with portraits of those connected with the house and the rich contrast of wood against pale stone is nothing other than striking. Exit the room via Nicholas Dubois’ early 18th-century staircase, a design built purely to add to the wow factor of the hall and to provide a ceremonial approach into the Saloon.

This room was always meant to overawe as it was built by Thomas Howard to accommodate James I, although its decoration has altered with fashions and Sir John Griffin Griffin redecorated in 1785. The piercing structure of the Jacobean ceiling was much later countered by the Braybrookes with sensory fabrics, Axminster carpet and family portraits – far removed from state room formality. Here, there are family portraits by Roman painter Biagio Rebecca illustrating the history of the owners of the house.

Rebecca had a hand in the decoration of the South Wing as did Robert Adam. Fine gilding, scenes of cherubs, flowers and angels are the result of delicate brushwork in their neoclassical Little Drawing Room, where the ladies of the house would have gathered after dinner. Alongside the elaborate interior decoration, visitors will also see some fine collections of art by the Old Masters Canaletto and Pieter Claesz. Volumes of literature are housed in two libraries. The South Library was the private collection of the 3rd Lord Braybrooke who made Audley End his main seat in 1825 and restored the mansion’s former Jacobean glory as best he could. His passion for books warranted the conversion of a second impressive library, with floor to ceiling shelves that played host to classic tomes as well as social gatherings.

The Tapestry Room is decorated with landscape tapestries by Paul Saunders of Soho, installed in the 1830s.

In the North Wing, the elegant Howard Suite is a romantic blend of 18th-century four-poster state bed, blue silk wall fabric and Chinese silk bed linen – a room fit for royalty that, in this case, never arrived: the eagerly anticipated visit of George III during his regional visit in 1786 brought disappointment when he took ill and curtailed his visit.

The decoration contrasts again to mark the fashions of the fourth (Victorian) generation of Braybrooke, such as the corridor of taxidermy displays. Beady eyes staring blankly across the void of the Picture Gallery – a connecting hallway from reception rooms to family bedrooms – may not be everyone’s cup of tea but they are certainly the closest many will come to seeing many unusual species, especially birds.

There is a less obvious history at Audley too, boxed into the two-year period from 1942-44 when the estate became the training HQ for the Polish Section of Special Operations Executives.

In a quiet corner the organic kitchen garden still supplies the house with fresh produce within a walled parcel of land close to the stable block, while, to the back of the house, the parterre comes into its own during early summer when the roses unfurl.

When the estate came into the nation’s care it was agreed that the property should be left largely alone following years of ceaseless change, not all in its best interests. However, as those who queue repeatedly at the gates will attest, centuries of alterations driven by vanity and necessity have done nothing to diminish its appeal.