As traffic speeds around London’s Hyde Park Corner, just yards from the busy thoroughfare, a Regency town house quietly welcomes visitors from around the world. You don’t need to book an appointment or even to ring the bell to enter, and this is how it has almost always been at Apsley House, the former home of Arthur Wellesley, 1st Duke of Wellington. Even before 1947, when the property was donated to the nation, visitors came to marvel at the 3,000 works of art and gifts that were bestowed upon the 1st Duke for his military achievements. These items are now known as the Wellington Collection – a veritable bounty of silverware, porcelain and porphyry, paintings and weaponry all housed within this exquisitely decorated house that has sheltered nine generations of ducal heirs. 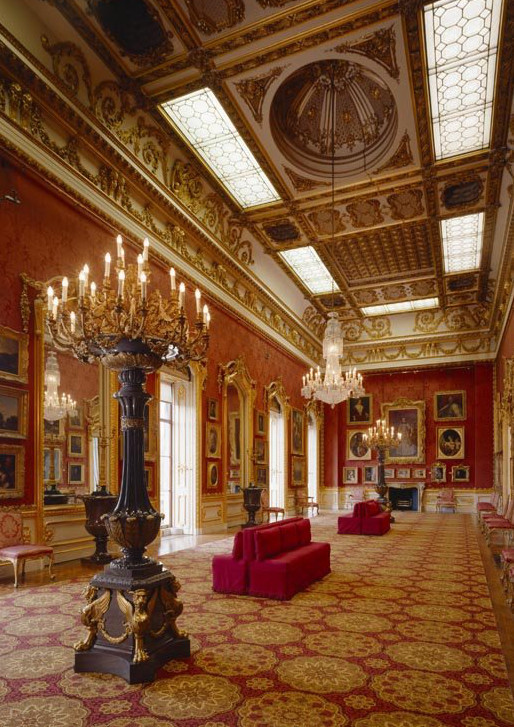 Managed by English Heritage, Apsley is the organisation’s only site to be jointly owned and the apartments to the rear of the property are roped off from prying eyes. In the garden hangs a child’s swing – a small sign that the house is still very much a family home. As Apsley’s latest heir, the 8th Duke of Wellington will testify: sliding down the bannisters of the Principal Staircase was a childhood delight! The property’s golden exterior can only be fully appreciated from across the street – a vision of symmetry in Bath stone. However, it was originally constructed in red brick by architect Robert Adam for the chancellor Lord Apsley, who wanted to live in this fashionable district. Work started on the house in 1771 and was completed in 1778 at a total cost of £10,000. Positioned on an island adjacent to Decimus Burton’s Triumphal Hyde Park Screen, the residence was given the nickname ‘No 1. London’ because it was the first house visitors to the capital would see after passing the city toll-gate from the villages to the west.

In 1807 the house was sold to Richard Wellesley, an Irish born aristocrat and politician. However, Wellesley was forced to sell up after just 10 years due to financial difficulties, not to mention an ugly separation from his French wife. His successor was his younger brother Arthur – an individual who was allegedly criticized from an early age by his own mother as being fit for cannon fodder and little else. In spite of this, Arthur went on to become an excellent soldier and, later, a decorated commander in the Peninsular Wars, where he led the allied forces of Spain, Britain and Portugal in a successful campaign against Napoleon Bonaparte and the French. In 1814 he was then asked to serve as the ambassador to France, where he was granted his dukedom, before returning to active service and conquering Napoleon Bonaparte at the Battle of Waterloo in 1815.

Keen to stamp his mark on his London home, Arthur employed English architect Benjamin Dean Wyatt who made vast alterations, including changing the façade of the house from red to gold and building the 90ft Waterloo Gallery to accommodate the 1st Duke’s growing art collection and lavish gifts he had received from dignitaries in gratitude for his military successes. After living in Paris at the Palais Borghese during his time as ambassador, it is unsurprising that Wellington decided to add a French flourish to the décor.

Over the next 35 years, Apsley steadily became filled with treasures dedicated to the glorification of the battles the 1st Duke had served in and a tour of the house reveals his unlikely preoccupation with his great rival Napoleon. Although the pair never met, Arthur held the Frenchman in great esteem and purchased many items originally belonging to him, including Napoleon’s sword case, several paintings and the marble statue of Napoleon as Mars the Peacemaker by Italian sculptor Antonio Canova, which dominates the stairwell of the principal staircase. The statue’s unveiling in 1811 led to some embarrassment for Emperor Bonaparte who thought it too athletic to be a fair representation of his advancing years, so he sent it to the Louvre. After the conclusion of the Battle of Waterloo, the British government and Prince Regent gifted it to the Duke, who installed it, with some difficulty, in its current position.

According to Josephine Oxley, English Heritage’s appointed guardian of the Wellington Collection, the 1st Duke was actually a modest man. “There were plans after the battle to construct a palace for Wellington and Dean Wyatt began some preliminary drawings for this,” she says. “However, while looking for ideas for the proposed site the Duke settled on Stratfield Saye House in Berkshire, which remains the family’s country residence. Perhaps he realised that the upkeep of a proposed palace would have ruined him, so he satisfied himself with improving Apsley.”

Little has changed at Apsley since the 1st Duke completed his alterations. Nineteenth-century visitors lucky enough to be shown to the refined Inner Hall would probably have remarked on the marble busts and the paintings. Admirers of the duke may also have been ushered into the Plate and China Room, just off the Entrance Hall, where memorabilia and gifts are displayed in vast cabinets, including the replica Egyptian dinner service of Sevres porcelain, which dominates the length of the room. It was first offered by Bonaparte to his wife Josephine as a divorce present, which she promptly rejected.

It is an early indication of the treasures that lie beyond. From the Inner Hall the Principal Staircase leads up to the Piccadilly Drawing Room, where an opulent yellow striped ‘taberet’ (silk satin fabric) bedecks the walls and the chairs, while a painting of the Chelsea Pensioners Reading the Waterloo Despatch by David Wilkie hangs on the wall.

Next door is the Portico Drawing Room, which takes its name from the Corinthian portico, which was added to the house exterior in 1828. This sunlit room was designed to be a second Drawing Room, taking advantage of the views across the park, and is home to a pair of Sevres porcelain vases made in 1814, one of which is decorated with now extinct African wildlife.

An undoubted highlight of a tour of the house is the Waterloo Gallery; a magnificent 90ft space lined with a number of canvases from the Spanish Royal Collection, which were gifted to the Duke by King Ferdinand VII of Spain in 1816. Masterpieces in the collection include paintings by Corregio, Rubens, Goya and Velazquez. The gilded overdoors were designed by Harriet Arbuthnot, who was the wife of one the 1st Duke’s friends and would be pleased to see that the original yellow silk damask that the duke insisted upon was later replaced by the red that is seen today. Next door is the much smaller Yellow Drawing Room where you’ll find a striking marble bust displayed on the pier table. This was a gift to the 1st Duke from sculptor Antonio Canova in 1817 and is was one of four ‘ideal’ heads produced for the British men who played a role in returning treasures looted from Rome by Napoleon to fill the Louvre.

To see a selection of Wellington’s closest military friends enter the Striped Drawing Room, where you will find them captured in full military regalia in the ‘hall of fame’. These full length portraits would have been a hot topic of conversation among the veterans who came to dine annually at the Waterloo Banquet from 1820. Such occasions were held in the State Dining Room next door, where the Portuguese Service table centrepiece is one of the finest pieces of 19th century silver in Europe and a lavish tribute to the allied armies of Britain, Spain and Portugal.

Down in the tiny Basement Gallery is a museum dedicated to Wellington, with an assortment of intriguing artefacts on view, including the decorative saddle blanket used on his favourite charger Copenhagen, Alfred’s specially made Wellington boots and various drawings of the 1st Duke during his time as a politician. “Many people don’t realise that Wellington was Prime Minister from 1828-1830 and he was lampooned quite a lot by caricaturists,” says Josephine. “The gallery displays some of these colourful cartoons drawn mainly by artists such as William Heath.”

Upon leaving Apsley House, don’t miss the opportunity to visit to the Wellington Arch, a memorial to the 1st Duke which met with controversy when it was first unveiled in September 1846. Atop the arch, Wellington’s 28ft high equestrian statue dwarfed its surroundings and was widely derided. It might have outlived the criticism had the arch not been dismantled and relocated to its current position to alleviate traffic congestion in the area in 1882. At this time it was decided that the statue would not rejoin it and eventually a home was found near the garrison at Aldershot in Hampshire where it remains today. A more modest statue of Wellington was created in 1888 by Joseph Boehm and stands opposite Apsley House. Work then began on a suitable replacement statue for the arch, and the equestrian chariot that remains in place today was unveiled in 1912. As the arch is also managed by English Heritage, visitors can tour the interior and take a lift to the top for views across the capital.

Apsley House is located on the northern side of Hyde Park Corner. Access is by underpass or pedestrian crossing. Visit www.english-heritage.org.uk Exclusive pre-booked tours of Apsley House and the Wellington Arch are available. Please call the property on 020 7499 5676.