Abbotsford, the newly refurbished home of 18th-century writer Sir Walter Scott, recently reopened to the public following a long spell of extensive repair. Closely monitored by a charitable trust set up in 2007 to preserve the property, work began just three years later. First, a new visitor centre was created in the grounds to complement the historic home and provide comprehensive information about its distinguished owner, with the house itself opened on 4 July 2013. In addition, groups wanting to experience more of the ambiance once enjoyed by the Scott family can check into the lavishly refurbished Hope Scott Wing, where esteemed guests were once accommodated. 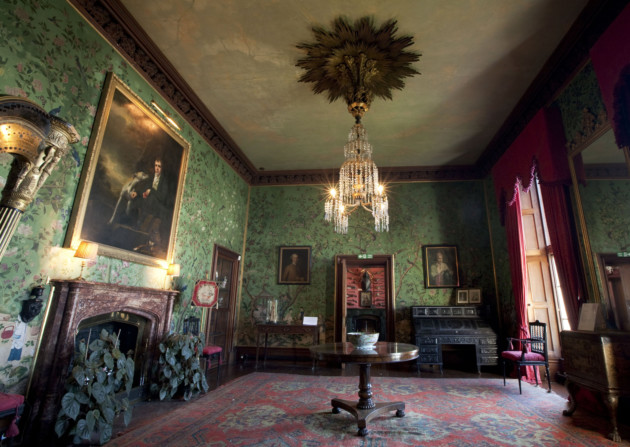 To understand Abbotsford, a fairytale palace set in the heart of the fertile Scottish Borders, one has to know Sir Walter Scott, the man of vision who created it. It could be said that he made the Scotland that everyone recognises today. Clans and tartan kilts, romantic scenery, Highlanders and Lowlanders, fierce loyalties, enlightened thinking, and a weave of national history filled with unforgettable characters and wonderful stories. Scotland was virtually unknown until Scott’s writing took the world of the early 1800s by storm. He invented the historical novel and wrote the world’s first best-sellers. His works were translated into more than 30 different languages. The young Walter was born in 1771, the son of an Edinburgh solicitor. He became slightly lame from polio so his father sent him, aged three, to stay with his grandparents on their farm near Melrose in the Borders. It was hoped that the fresh country air would cure him. It may have helped but he had a limp for the rest of his days. However, it was the peace and beauty of this historic land of his forefathers that took his fancy so he could never rest content until he had his own personal part of it. Back in Edinburgh, after a spell at school and then studying Classics at Edinburgh University he joined his father’s legal firm and returned to University to study Law, Moral Philosophy and Universal History. He gained admission to the Faculty of Advocates in 1792.

When he was about 26 years old he published The Minstrelsy of the Scottish Border, a collection of ballads of the region, and it sold well. The following year the aspiring young writer met an attractive French girl – Charlotte Genevieve Charpentier – and within three weeks they were engaged. The marriage ceremony took place on Christmas Eve 1797. Quite soon after this he was pleased to be appointed Sheriff-Depute of Selkirkshire in the Borders.

A close friend of his, James Ballantyne, had started a printing business in nearby Kelso and through him Scott was able to publish some of his poetry including The Lay of the Last Minstrel which had widespread sales. There were further successes in the following years such as Marmion and The Lady of the Lake, set in the Trossachs, which had such worldwide popularity that Schubert set part of it to music. In 1809 Scott invested money in the Ballantyne brothers successful printing business and became a partner. At about this same time he decided to try his hand at prose instead of poetry. At the time, prose narratives were considered decidedly ‘downmarket’ in comparison to epic poetry so he published his first novel Waverley anonymously in order to avoid damaging his good reputation as a poet. Waverley is a tale of the Jacobite Rebellion of 1745 and it became a worldwide best-seller.

Scott loved Scottish history and found it easy to weave exciting plots from the known facts. So having had success with Waverley he turned to other themes and published a number of further historical novels – but these were still published anonymously and it was not until 1827 that he admitted his authorship. Nevertheless most of his friends were aware who the author was and in 1815 his fame was assured when George, the Prince Regent, invited the ‘author of Waverley’ to dine with him.

One of Scott’s tales was The Bride of Lammermoor. The Lammermuir is a wide area of hilly open country lying between Edinburgh and the Borders. This story inspired Donizetti’s famous opera Lucia di Lammermoor and a painting by Eugène Delacroix.

Scott next tried his hand at an English historical novel and the result, Ivanhoe, was a phenomenal success which was translated into many different languages. The Prince Regent was a great admirer of Scott’s work so when Scott requested his permission to form a team to search for the ‘Honours of Scotland’ – the Scottish Regalia – he readily agreed. The crown and regalia had disappeared during Cromwell’s occupation but they were thought to have been deliberately hidden to stop their removal from Scotland. Scott’s search was successful, and the Honours were discovered concealed in Edinburgh Castle. The Prince was delighted and rewarded Scott with a baronetcy.

When the Prince mounted the throne as George IV, a visit to Scotland was planned – the first visit by a British monarch for 150 years. At the last minute Edinburgh City Council asked Scott to organise it and in only three weeks he created a remarkable pageant. Highland dress had been banned by law ever since the Jacobite Rebellion but Scott reintroduced it and even persuaded the King to wear it. Unfortunately, as he was rather pudgy, Scott made him wear pink tights under his kilt for modesty. Many of the dignitaries also wore Highland dress and the visit was such an outstanding success that to this day the kilt has become an essential part of all Scottish ceremonial occasions, Highland and Lowland.

Scott was sufficiently prosperous by 1811 to consider building his dream home on the banks of the Tweed and after a search in the area of his grandfather’s farm he bought a small farm two miles west of Melrose. Through the years he added further tracts of land until his estate extended to nearly 1,000 acres. Starting with the original small farmhouse and in conjunction with his architect William Atkinson he developed a unique design whose style became known as Scottish Baronial. Abbotsford was eventually completed in 1824 with extensive formal gardens and landscaping. Queen Victoria, after visiting it, insisted that Balmoral should be built in a similar style and Scottish Baronial became the favoured design for many Victorian buildings.

Sir Walter had hardly settled in when there was a banking crisis and the Ballantine printing business collapsed. As Scott was a partner he became liable for part of the debts of the firm but he took it upon himself to ensure that no one should suffer any loss. Although he was a wealthy man the debt at today’s rates was about £10,000,000 – well beyond his means. He therefore started writing in earnest and produced many great novels and a biography of Napoleon. (An egg timer is on display which he used to try and speed up his writing). In the end, the intensive stress may have ruined his health for on 21 September 1832 he died suddenly in the Dining Room of his beloved home, which earlier that year had been turned into his bedroom to allow his last days to be spent enjoying his beloved view over the Tweed. The proceeds from his writing eventually discharged all the debts.

Abbotsford was first opened to the public in 1833, just five months after the writer’s death. It is situated near a Roman road and an ancient ford used by the monks of Melrose Abbey, which inspired the name for the property. The building had been deteriorating for years so in 2011 more than 13,500 objects were catalogued and removed from the house and major repairs and renovation began. Restored to the house, these items will be on display. Scott had an impressive collection of historic relics, weapons and armour such as Rob Roy’s gun, Montrose’s sword and 2,000 rare books housed in the Study.

Abbotsford is full of beautiful and sometimes quirky features: windows with stained-glass heraldic shields, fine furniture and pictures, and oak and cedar panelling on walls and ceilings with delicate wood-carving. Parts of the house open to view are the Entrance Hall, Scott’s Study, where he wrote most of his books and which will be used to house a series of temporary exhibitions; the Library, Chinese Drawing Room, which is still papered with the original 18th-century Chinese pattern gifted by a family member; the Armouries and the Dining Room in which he died. Scott’s eccentric Religious Corridor has also been restored to its full glory. The room was used by the family when retiring to the bedrooms upstairs and is filled with casts from the ancient stones of old ecclesiastical buildings.

As Jason Dyer, Chief Executive of the Abbotsford Trust says, “Scott left a towering literary and cultural legacy that means his name is still well-known across the globe. Our restoration work has created an attraction that we believe is worthy of one of Scotland’s most important sons.”