In an excerpt from her latest book, More Cotswolds Memoirs, Diz White explores how Downton Abbey’s popularity has helped with the preservation and conservation of England’s ancient buildings…

Much has been written about the fascinating history of Highclere Castle, the location of Downton Abbey’s filming, however, the film locations used in the Cotswolds are equally interesting and during my research for my book More Cotswolds Memoirs I set out to identify them and delve into their history.

Julian Fellowes was staying with friends in Bampton as he began writing Downton Abbey and was so impressed with the ancient buildings in this forgotten-by-time Cotswold village that he immediately “cast” it as “Downton village” in his world-renowned series.

On arrival in Bampton I immediately spotted the church, renamed St Michael and All Angels in Downton Abbey and the background for countless Sunday morning gatherings and weddings in the series.

It is actually called the church of St Mary of the Virgin, dates from the 12th century and, like many ancient buildings in Britain, was built on the foundations of an earlier structure, incorporating parts of the older building into the new edifice.

St Mary’s was erected on the site of an Anglo-Saxon minster. The tower was the only feature of the minster that was spared and it is now part of the rebuilt church. St Mary’s is also distinguished by its magnificent 13th-century spire. William the Conqueror gave this church to the Bishop of Exeter and it has been altered and added to many times throughout the centuries.

My visit coincided with a day that filming was scheduled and, being an avid viewer of Downton Abbey, I was interested to see that the village was being dressed for scenes about to be shot.

Church View, one of Bampton’s main streets, is home to two fictional pubs in the series and is also the site of the Downton Fair. On this day one of the 17th-century simple, wool-worker’s cottages, constructed of oolitic, honey-hued limestone, had been cleverly turned into the Dog and Duck pub and another into the Grantham Arms.

A war memorial had been added in front of the church by the film crew and other set pieces transformed Bampton into Downton village. Film extras were waiting to walk by in a scene and together with the cameras and crew were grouped around the church. In the distance the actor Hugh Bonneville, who plays Lord Grantham in the series could be glimpsed as the cameras whirred.

When a break was called in the filming I strolled on a few yards and recognised “Downton Hospital”. According to Pevsner and Sherwood’s book, The Buildings of England, this building was once the old Grammar School of St Mary’s Church, built in 1653. It is now used as the Bampton Community Archive and displays exhibitions and a selection of Downton Abbey memorabilia.

This building is in need of repair and it is heartening to see that Hugh Bonneville has spearheaded a successful campaign to raise money for it restoration.

Within a few yards, in the opposite direction, I found the Old Rectory, now named Churchgate House, which is close by St Mary’s Church. This was used for exterior shots of Isobel Crawley’s house in Downton Abbey. Only a little of this building is visible from behind a high wall but is still quite recognisable from the scenes in the series.

The south side of this building is late 17th century and features five bays. The back of the house is older, with a 16th-century arched stone doorway and in the garden wall there is a stone inscribed with the date 1546.

Next to the Rectory are 17th-century stables with a gabled dovecote built over them. The interior scenes of Isobel Crawley’s house, however, were filmed at Hall Place near Beaconsfield in Buckinghamshire.

It is apparent that the popularity of Downton Abbey is helping to develop an awareness of the value and beauty of ancient buildings in England and is serving as an aid to their preservation. To donate to the Society for the Protection of Ancient Buildings, visit www.spab.org.uk 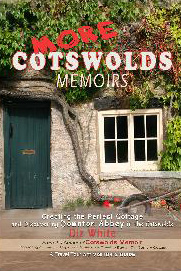 This is an excerpt from More Cotswolds Memoirs: Creating the Perfect Cottage and Discovering Downton Abbey in the Cotswolds by Diz White, which is available on Amazon, Kindle and at Waterstones. For more on Diz White and her other books, see www.DizWhite.com

A comprehensive guide to the Cotswolds