Discover the top 11 House of the Dragon and Game of Thrones filming locations in the UK. Visit them now and immerse yourself in the magic…

It has been three years since season 8 of Game of Thrones aired but now Westeros is back on our screens and looking as enchanting as ever. House of the Dragon is here with a talented cast, exciting plot line and the gory scenes you have come to know and love.

It portrays a story that happened 200 years prior to the events in Game of Thrones. Viserys Targaryens sits on The Iron Throne and struggles with the decision to name an heir which leads to anger brewing throughout the Seven Kingdoms.

Sweeping, fantastical landscapes fill the screen once again which look too divine to be real. Experts at Irish Casino Slotbox.com have revealed the most stunning spots from the new House of the Dragon and the old loved places from Game of Thrones so that you can visit the magical terrain of Westeros and tread the same ground as characters you adore.

House of the Dragon

House of the Dragon filming locations in Cornwall

The remarkable Cornish island is traditionally accessible by a cobbled path and only when the tide is low. It is the backdrop of Driftmark in Blackwater Bay in the new program. You must pre-book tickets to visit and can walk or travel by boat. A fantastical climb up the narrow, winding path takes you all the way to the top where a 12th century castle balances. 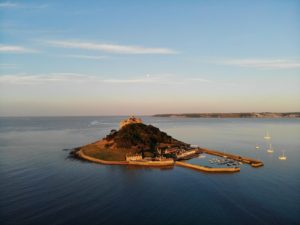 Holywell Bay Beach is another spot in Cornwall and is absolutely breathtaking with its wide stretch of beach and crescent moon of water. The characters of Daemon and Rhaenyra Targaryen were filmed on this beach together immersed in stern conversation.

Cornwall’s Kynance Cove is recognisable as the Valyrian camp and famous in its own right. Rock formations which appear otherworldly and the bright white sand may be the reason this beach was chosen to make an appearance.

Visitors are advised that the parking is limited and during the summer it gets very busy. Perhaps head to the cove in the early hours of the morning to experience the natural beauty and to imagine dragons in the sky. Eldon Hill has been announced as a location and is an eerie place, dappled with sheep and mist. It lies in the Peak District National Park and a large proportion of the hill has been lost to limestone quarrying. There are beautiful walking, running and cycling routes in the area which you can amble down while catching a glimpse of the filming location.

Cave Dale in Derbyshire is a dramatic limestone quarry with steep sides and narrow paths. Matt Smith was spotted there in September 2021 which evoked excitement in the locals and speculation about when the location would be spotted in the new series.

Twisted beech trees curl over the road creating a strange and fairytale-esque image. In 1775 these trees were planted by order of James Stuart to create an imposing entrance to his estate.

It is no wonder that this display of nature was chosen to feature in Game of Thrones as The Kingsroad. Arya Stark manages to escape King’s Landing down this road in season 2, bundled into a cart and dressed as a boy. This spectacular tunnel is a great place to visit to immerse yourself in the magic of Game of Thrones.

The sublime ruins of the Medieval Dunluce Castle feature in Game of Thrones as House Greyjoy. Visit the place that appears in season 2 due its dramatic position on the edge of the cliff and narrow entrance across a crumbling bridge. 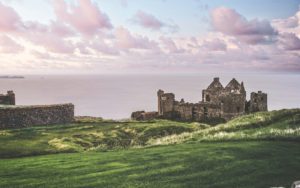 Castle Ward features in Game of Thrones as Winterfell in season 8. The 18th century National Trust Property is a wonderful place to visit and explore. Experience the spot where they filmed and stroll through their newly restored Victorian garden. There is also a tea-room to indulge in and escape the bitter winds of the North. Truly immerse yourself by taking part in the Tollymore Forest Trek which will take you on an adventure through the trees in thick fur cloaks. You will stop off at the spots which were chosen for filming such as where the rangers of the Night’s Watch found the dismembered bodies in season 1.

The damp and murky cave where Melisandre gave birth to a mythical shadow is on the list as a hotspot to visit. You can stroll to the site of the very strange occurrence and enjoy views over the rolling ocean before delving into the bulbous caves.

Once a Medieval stronghold, Doune Castle was transformed into Winterfell for the first season of Game of Thrones. You can visit the capital of the North and indulge in a Game of Thrones tour or privately admire the ancient walls. The castle is elaborate and built to impress and you will be awed by the cavernous rooms as you walk through the same hallways as the Stark family.