Discover the industrial heritage of England’s northwest on a boat trip along the Manchester Ship Canal. Take a cruise along the Manchester Ship Canal, a 35-mile journey through 120 years of industrial heritage that propelled Northwest England to the forefront of the industrial age. Regular trips, organised by Mersey Ferries, run from April to October each year, some starting from the National Waterways Museum at Ellesmere Port, others from the Seacombe Ferry Terminal on the Wirral. The trips showcase the special place the Manchester Ship Canal has in industrial history. 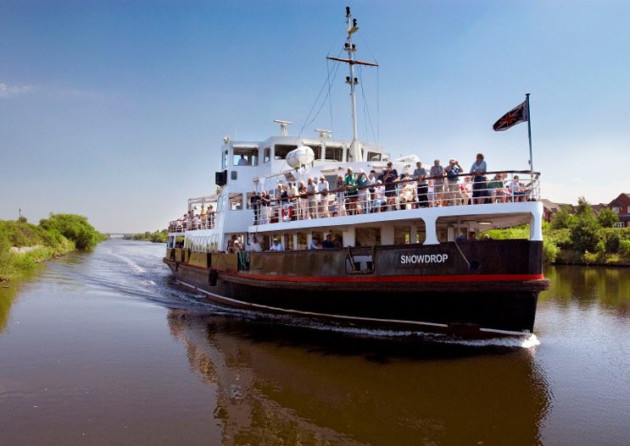 Cruise along the Manchester Ship Canal

A canal-building craze swept Britain at the start of the Industrial Revolution with over one hundred canals built between 1760 and 1820. It was an obvious solution to the requirements of the age. The growing inland waterway network could transport produce and raw materials across the country cheaply and efficiently. By the 1880s Liverpool had become a major port city but Manchester’s industrialists were catching up fast on the back of the textile trade. They were determined to find a solution to the cost of transporting goods through the port of Liverpool – port charges and railway costs for the 30 miles from Liverpool to Manchester were often greater than those for the journey across the Atlantic. The genesis of the Manchester Ship Canal, or the Big Ditch as it was colloquially known, came with the Ship Canal Bill, passed at the third attempt in 1885 – much to the relief of the Manchester industrialists pushing to link Manchester to the sea. The authorities in Liverpool were desperate to block the move, sparking an arch-rivalry that continues to this day in the arts and on the football pitch. The engineer Sir William Fairbairn wrote at the time that it would help Manchester “quadruple her population and render her the first, as well as the most enterprising, city of Europe.”

The project to undertake the work was finally awarded to the engineer Thomas Walker, who had previously constructed the Severn Tunnel, and Lord Egerton of Tatton cut the first sod at Eastham Lock on November 11, 1887. Using mechanical excavators and an average workforce of 12,000 men, many of them navigators or ‘navvies’ drawn from across the UK, work started to dig out the canal from a base of sandstone rock. Some 54m cubic yards of material were excavated over the six years until completion and the cost of the project soared from initial estimates to a final total in excess of £15m.

“The Manchester Ship Canal, or the Big Ditch as it was colloquially known, came with the Ship Canal Bill, passed at the third attempt in 1885… The authorities in Liverpool were desperate to block the move, sparking an arch-rivalry that continues to this day in the arts and on the football pitch.”

A ceremonial procession of boats left Eastham on January 1, 1894, to mark the opening and herald the arrival of Manchester as a port for customs purposes. By the time Queen Victoria performed the official opening ceremony on May 21, 1894, the canal was fully operational – the largest river navigation canal in the world. Despite the heavy initial investment, prosperity was slow coming, however. Only once Manchester formed its own shipping line, Manchester Liners Ltd, and put seven cargo vessels to work on the canal, was the connection to the key trade routes of the world secured. Manchester’s moment had come at last.

Today, visitors can cruise at a steady 4mph towards the ten sluice gates of the Weaver Bend. The iron hulks of the twin road and rail bridges at Runcorn mark the first crossing point for the Mersey. Of the two, the Silver Jubilee Bridge, the four-lance road bridge connecting Widnes and Runcorn, is the more striking. It was opened in 1961 to replace the outdated Runcorn Transporter Bridge, which was first built in 1905 to avoid impeding canal traffic.

The cruise continues westwards towards Warrington and, just before the Thelwall Viaduct, which carries the M6 motorway, the canal passes under a series of bridges. Latchford Locks is the next engineering landmark, the first set of locks since Eastham and part of an ancient right of way.

A final engineering marvel lies just beyond Irlam Locks. The unique Barton Swing Aqueduct replaced the original aqueduct, which carried the Bridgewater Canal across the Mersey. It’s the first and only swing aqueduct in the world. At the time of the canal’s construction, the solution proposed was to build a swing bridge with a tank containing water that could be sealed when required and swing open to allow ships through the Canal. The aqueduct carries 800 tons of water and, while originally operated by hydraulic power, it now works with electric pumps.

The cruise is not all about industrial architecture and civil engineering, however. For some people, it’s a more about a chance to get close to the local wildlife than lock gates and bridges. In particular, Wigg Island at Halton, near Runcorn, is a Local Nature Reserve on the banks of the Manchester Ship Canal. The 23-hectare site is a triumph of industrial land reclamation. The island is named after Charles Wigg, who started an alkali works there in the 1860s to extract copper from its ore. Today, it’s a popular spot for birdwatchers, while Bee Orchids are among the local flora.

Finally, after some five hours of gentle cruising, the boat chugs through Mode Wheel Locks and enters Salford Quays, home to the BBC studio complex at MediaCity UK. Before the bus transfer back to the National Waterways Museum at Ellesmere Port, there’s time to look around Salford Quays and pop into the Lowry, where artworks by the local artist L.S. Lowry find a permanent home alongside a theatre and arts centre. The artist is best known for his stark, matchstick-thin scenes of industrial-era life in Salford and The Pond, one of Lowry’s best-known industrial landscapes, has pride of place in the gallery.

The arrival of the railways in the late 1800s sounded the death knell for Britain’s canals network and, by the early 20th century, many canals had fallen into decline through a lack of use and neglect. The campaign to save Britain’s canals began in 1946 with the formation of the Inland Waterways Association and, today, regenerated canals combine roles in industry and leisure. The Manchester Ship Canal is a primary example of this.

Travel by narrowboat around the Cheshire Ring Canal

Elizabeth Gaskell’s House in Manchester reopens to the public