In our new about-town series, we highlight some of the top things to do in the capital, this issue: the best theatre shows in London for the year ahead

Roll up, roll up, can there be a more London night out that a trip ‘up west’ to see a show in London’s theatreland?

The West End, that glittering part of London, which lies just west of the City of London and encompasses some of the capital’s more famous spots – Piccadilly Circus, Trafalgar Square, Oxford Street, Bond Street, Leicester Square, and Soho – can rival Broadway for its high-calibre stage shows and footfall, but how do you ensure you see a smash hit show rather than one forced to cut its run short? By listening to us, of course. Here are our recommendations of best theatre shows in London for 2o23.

The best theatre shows in London for 2023

A worldwide smash hit, since premièring on Broadway in 2003, this musical, which tells the story of the unlikely friendship between the witches of Oz, has also courted similar success in London. First showing at London’s Apollo Victoria Theatre in 2006, it is now the 9th longest West End show in history and never fails to delight audiences. Pop into the cocktail bar at The Goring nearby (the only hotel to hold a Royal Warrant for hospitality services) for a pre-dinner meal or drink, or if you’re feeling very flush, book in for the night.

The Phantom of the Opera

There are few bigger West End success stories than that of this long-running Andrew Lloyd Webber show, undoubtedly one of the best theatre shows in London. With an original opening night of 9 October 1986, the show, which adds a musical score to an adaptation of Gaston Leroux’s namesake novel, is a macabre love story between a young ballet dancer and a mysterious ‘phantom’, who becomes obsessed with her. Though the Broadway show, which also opened in 1986, is set to close in February 2023, the West End show, at Her Majesty’s Theatre on London’s Haymarket, just off Pall Mall, is taking bookings until at least 30 September 2023.

We Will Rock You

Returning to London’s West End for a limited summer run – this time showing at the London Coliseum from 1 June to 26 August 2023 – this high-energy rock musical is a fan favourite and one of the best theatre shows in London. The London Coliseum is the same stage on which Queen frontman Freddie Mercury took part in an unforgettable Royal Ballet gala performance in 1979. Speaking about this limited-run return of the show to London, writer Ben Elton said: “I hope somebody’s squared this with English Heritage because the fabulous London Coliseum is a Grade II listed theatre, and We Will Rock You is gonna blow the roof off.”

From 16 February to 2 September 2023, this Tony award-winning revival of a Rodgers and Hammerstein classic, which has been ‘re-orchestrated for the 21st century’ will be on at London’s Wyndham Theatre following sold-out runs in New York and at London’s Young Vic Theatre. The show, which tells the story of a community that bands together against an outsider, is sure to be the talk of the town in 2023. Afterwards, head to Chinatown for a late dinner.

Ain’t Too Proud – The Life and Times of The Temptations

Excitement is building for the West End transfer of this Tony award-winning Broadway musical about The Temptations, which comes to the Prince Edward Theatre on Old Compton Street, near Leicester Square, from 31 March 2023. Following the journey of the band from the streets of Detroit all the way to the Rock and Roll Hall of Fame, the show, which features hit songs such as My Girl and Just My Imagination looks set to become a mainstay of London’s West End and to do for The Temptations what Jersey Boys did for The Four Seasons. Afterwards, if you’re still in the mood for some music, pop over to Ronnie Scott’s – one of London’s most celebrated jazz clubs, where there’s music in the upstairs bar every night of the week.

Booking until at least April 2023, this stage show, which very much follows the plot of the famous 80s film, may be a bit risqué for some, but those who aren’t put off by more adult themes, will love the setting, which is about as glamorous as they come. The theatre, which in its more than 140-year history has staged everything from Oscar Wilde’s Salome, and Noël Coward’s Blithe Spirit, to the modern-day Dreamgirls musical, can be entered to the right of the main entrance of the sophisticated Savoy hotel. Factlovers may note that unlike most UK roads, on Savoy Court, on which both the hotel and theatre stand, you must legally drive on the righthand side of the road.

OFF THE WEST END 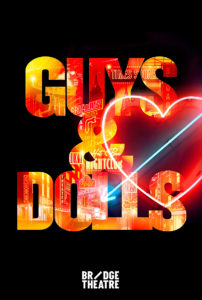 Slightly away from the main theatre hub, from March to September 2023, one of the greatest musicals of all time is coming to one of London’s newest theatres, The Bridge, in Tower Bridge. Promising to be an ‘immersive’ experience in which the audience is wrapped around the action, this London outing for Guys and Dolls, is unlikely to be like any version you have seen before – The Bridge, which opened in 2017, has built up a solid reputation for its daring productions. Before the show, check out the excellent pre-theatre menu at the nearby Rotunda Bar and Lounge set beneath an incredible domed ceiling in the Four Seasons Hotel.

This is an extract from the February/March 2023 issue of Discover Britain, which will be on sale from 6 January. Get your copy here.

Alnwick Castle: an inside tour with the Duke of Northumberland

The best places to visit in Northumberland: a tour of castle country

New year breaks in Britain: the most peaceful places in the UK