‘How Watson Learned The Trick’ is among over 200 tiny books produced by some of the most famous authors of the early 20th century for the library of Queen Mary’s Dolls’ House – one of the most famous dolls’ houses in the world and on permanent display at Windsor Castle. Other contributing authors include Thomas Hardy, Rudyard Kipling, Sir James Barrie and Edith Wharton. A lesser-known tale about Watson and Holmes will now be published next month by Walker Books in collaboration with Royal Collection Trust and it will be an exact replica of the hand-written story created by Conan Doyle exclusively for Queen Mary’s Dolls’ House in 1922. Over the course of 40 years, between 1887 and 1927, Sir Arthur Conan Doyle (1859 – 1930) wrote 56 short stories and four novels about the character Sherlock Holmes, among them A Study in Scarlet and The Hound of the Baskervilles. Watson appears in all but four of Holmes’s adventures. The Dolls’ House story, written in thick black pen over 24 pages, sees Watson trying his hand at the art of deduction and attempting to emulate Holmes’s famous logical reasoning. 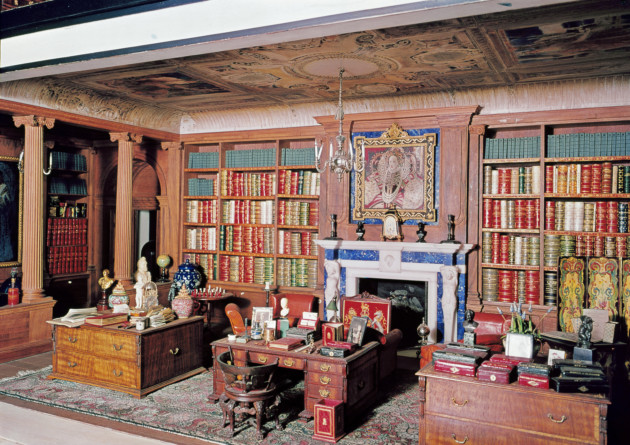 Downplaying Holmes’s skills, Watson remarks over breakfast: ‘I was thinking how superficial are those tricks of yours…Your methods are really easily acquired’. He goes on to deduce that Holmes’s unshaven appearance indicates that the detective is ‘greatly preoccupied’ and that his friend’s interest in the financial page of the newspaper reveals that Holmes has turned to financial speculation. Unfortunately, Watson is proven wrong at each turn – in fact Holmes has sent his razor to be sharpened, and the cricket page is adjacent to the financial page.

The Dolls’ House was created in 1922 for Queen Mary, consort to King George V, by the renowned architect Sir Edwin Lutyens. It is a perfect replica of an aristocratic Edwardian residence at a scale of 1:12 and includes electricity, running water and functioning lifts. The Dolls’ House library is lined with walnut panelling and furnished with a writing desk complete with a tiny Swan fountain pen and inkwell, miniature stationery and even a little reading lamp.

Oliver Urquhart Irvine, The Librarian, Royal Collection Trust, said: ‘Sherlock Holmes is a world-renowned literary figure and an enduring character, who remains as popular today as in the Victorian society that Conan Doyle characterised. I am delighted that for the first time this Sherlock Holmes tale will be available in the exact format that Sir Arthur Conan Doyle produced nearly 100 years ago.’

‘How Watson Learned the Trick’ is published by Walker Books in collaboration with Royal Collection Trust on 2 October 2014, price £12.99. It comes in a special presentation box and is accompanied by a booklet that includes a transcript of the story and background on Sherlock Holmes, Sir Arthur Conan Doyle, and Queen Mary’s Dolls’ House. It will be available from Royal Collection Trust shops, online at www.royalcollectionshop.co.uk and www.walker.co.uk, and in all good bookstores.

Mary Shelley and her monster